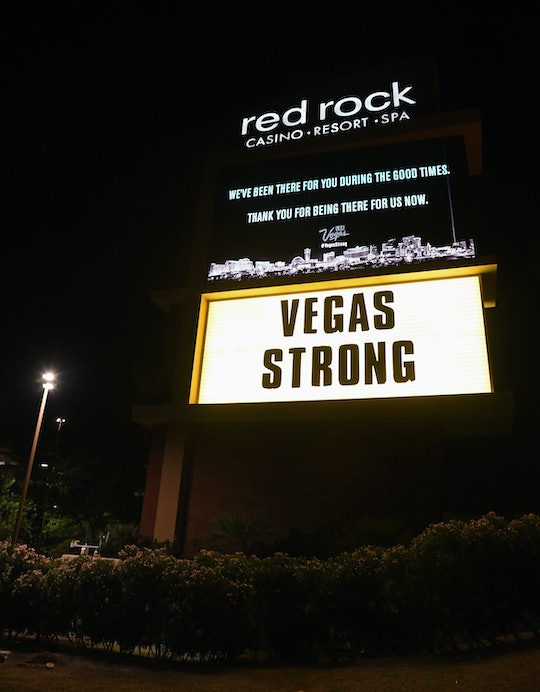 Let It End In Vegas

Up until this week, when someone heard “Vegas,” they thought of an adult playground or the saying “What happens in Vegas stays in Vegas.” But for me "Vegas" means home. It means the street names I know by heart and the buffets I grew up eating at, the hotels I had my first dances at and the first time I saw live acrobatic show. When I think of the Strip, I think of first dates that included ice cream and watching the Bellagio fountains. Las Vegas is an unconventional place to grow up, but for kids, "Sin City" is also remarkably innocent. We had prom, worked summer jobs at the hotels, and learned early on what good customer service meant. Some friends went to college and started families in Vegas. I’ve gone back for holidays, weddings, and baby showers. Vegas isn’t just a vacation, it’s a part of me. It’s my childhood.

Ironically, like many kids with Big Plans for themselves beyond their hometowns, I couldn’t wait to leave Vegas. As soon as I graduated and turned 18, I left and started my life in different cities. I haven’t lived there for nearly a decade, but this week I feel more connected to my city of origin than I have in my entire life. Vegas is a close and tight-knit community. The locals know each other.

I know the elevators and stairs. I know how the view from the hotel rooms and out onto the strip is always picture worthy — all the lights and life going on down below.

When I watched the news Monday from Washington, D.C., where I live now, I felt like the ground had dropped out from under me. I worried that I'd lost someone and knew that even if I hadn't, people I know surely had. The distance from where I started no longer felt freeing. In that moment, seeing the carnage from so far away, I felt so helpless and so homesick.

When I first heard about the shooting around 4:30 am Monday morning, I contacted my family to see if everyone was safe. It wasn't until later in the day, when the chaos started to settle, that I heard about the friends who were there, the friends of friends who had died, the family members who got out safe, sons and daughters who are still in critical condition, and first responders I used to sit next to in class who rushed in to help. It wasn’t until later that the “still missing” Facebook posts started flooding my feed. It wasn't until later that I started making calls — to lend an ear and but also a heavy heart.

When I think of the Mandalay Bay Resort & Casino, where the shooting took place, my most vivid memory is of my mother and me shopping on the weekends at the then only Urban Outfitters in town. I also think about the times I played tourist and stayed for a weekend. I know the elevators and stairs. I know how the view from the hotel rooms and out onto the strip is always picture worthy — all the lights and life going on down below.

I want to do something to make sure that what happened to Vegas stays there.

But now when I think of those views, I also think of the terror my home has endured. I think of my first country concert on the strip and all my good memories and now I think that this will be someone else’s first memory of their first concert. How this is nearly 60 people’s last concert. No, not people — friends, classmates, neighbors, parents, sisters, brothers… this could go on and on.

I want to mourn with my city, with my friends and family. I want to stand in line with thousands of others to give blood. I want to feel like I’m making a difference in this senseless act of hate, and I know I’m not alone. I want to do something to make sure that what happened to Vegas stays there.

I want this to be the largest and last mass shooting in America. I want no other city to have to tell America they are Strong. I don’t want another city to feel the heartbreak of a senseless act of hate.

This isn’t about the right to bear arms, this is about the right to not fear for your loved ones when they go to a concert. It’s about our right to send our children to school and not fear they won’t come back. It’s about us as a country recognizing we have a problem, and it’s not getting better — in fact it is getting worse. It's about saying, "Enough."

Let what happened in Vegas end in Vegas.