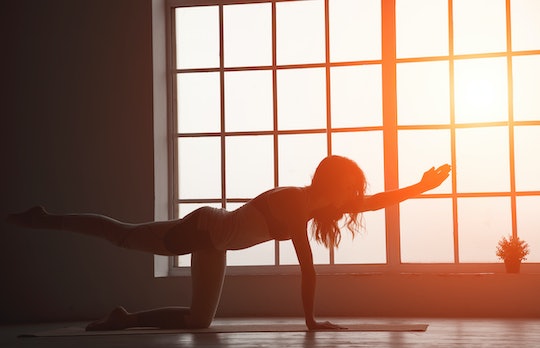 Yoga is a lot of things to a lot of people. As it gained popularity in the United States, it seemed that different yoga styles were popping up every other week. One thing I heard a lot about was "hot yoga." But as someone who avoids extreme heat whenever I can, I wondered, "Is hot yoga safe?" I mean, I'm all for some stretching, strengthening my core, and focusing on my breath, but I'm not going to do it in a heated room if it's not beneficial.

To answer the question as to whether or not hot yoga is actually safe, we must first define what we're talking about, specifically. What, exactly, is hot yoga? According to the Mayo Clinic's Dr. Edward Laskowski, "Hot yoga is a vigorous form of yoga performed in a studio that is heated to 105 F (40 C) and has a humidity of 40 percent." Originally named Bikram yoga, after its founder, Bikram Choudhury, hot yoga "is a 90-minute program that consists of a series of 26 postures." As The Guardian reports, however, some from the Bikram community have distanced themselves from the name, due to the many allegations of abuse Choudhury has faced. Hence the renamed "hot yoga."

Exerting oneself at such high room temperatures is understandably concerning. The Center for Disease Control and Prevention (CDC) cautions that extreme heat can be dangerous to one's health. In severe cases heat can even cause death. For those reasons alone, Laskowski make sthe following warning:

"Because of its intensity and potential to cause heat-related illness, hot yoga isn't for everyone. Be sure you check with your doctor before trying hot yoga if you have any health concerns."

Specifically, Laskowski says, "[i]f you have heart disease, problems with dehydration or heat intolerance, or have had heat-related illness (such as heatstroke) in the past, it is probably best to skip hot yoga. Pregnant women should also pass on this type of yoga."

Brian L. Tracy, an exercise scientist at Colorado State University, tells Time, “Considering how popular [hot yoga] is, it’s pretty shocking that our study is one of the very first published research efforts on the subject.” Tracy studied the potential health effects of hot yoga such as weight loss and heart rate. The findings aren't as dramatic as those of us who've endured hot yoga would have hoped, though. Men and women, his study finds, burn about as many calories doing hot yoga as if they'd taken a brisk walk.

Tracy explains the findings of his research further, saying, “I think the heat and the difficulty of the postures combine to alter your perception of the intensity of the exercise. [However,] [h]eart rates are quite high for the amount of work you’re doing. Quite high.” These high heart rates, as noted above, can be especially concerning if you already have heart conditions.

So, is hot yoga actually safe? Well, as shown above, it depends on your body and your specific health concerns. The experts seem to agree that mindfulness of your body is essential if you want to experience this practice safely. You can find a list of what to do to keep yourself safe during hot yoga in The Yoga Journal, too, and, as always, if you have any additional questions or concerns you should speak with your health care provider before booking your first hot yoga class. After all, that's what your doctor's there for.