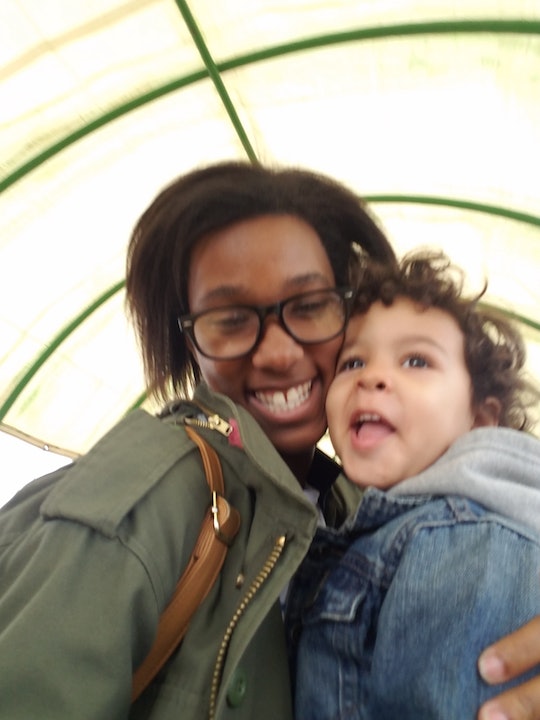 No, We Don't Ever Go On Mommy-Son "Dates"

When my son was a little over 1 year old I posted a picture of him sitting in his stroller with a big smile. “Hot fudge sundae date…” I captioned the picture. I didn’t think much of it at the time, but as he got older, I realized that using the word “date” to describe us going out to eat or do something special had a connotation I wasn’t entirely comfortable with. Some people may think the idea of a mother/son date is cute, but I think the idea of "dating" my son is actually a little creepy. Not because I think there's anything wrong with spending special time with your son, but because there is a certain meaning behind the word date that shouldn’t be connected to your kid. When I think of dates and dating, I think of getting dressed up, putting on makeup, and trying to endear myself sexually to someone I am attracted to. And I am not sexually attracted to my toddler.

As a single mom with a son, I've already been accused of treating my son as a stand in for a partner, so I do not need to fuel the fire by telling people that I take him out on “dates.”

Because it’s just the two of us, all of our outings are one on one. He gets dragged along when I have to go shopping or run errands, so I like to buy him a little something special or take him to eat while we’re out. I'd never go to the kind of places I’d go to on a date because well, let’s face it, even if I did think of it as a “date,” my 3 year old isn’t a very good date; he’s not much of a conversationalist, he’d rather play with his toys than talk to me, and I always have to pay. His idea of a good time is a trip to Toys "R" Us for a toy train and a trip to Five Guys for french fries. I won’t even take him to a sit-down restaurant, or even a chain one because it’s a total waste. Our special mother-son outings are to Wendy’s for a kids’ meal and a chocolate Frosty.

If you search the term “mother-son dates,” you'll get page upon page of suggestions. One site suggests things like “planning a picnic,” “going to the movies” or “bowling.” Those are just normal things that you can do with your son anytime for any reason, so why do you need to call it a date? Call it what it is: spending time together doing something fun. Calling it a date places expectations on the event, like it’s supposed to be a big deal. I can understand that they’re used as a way to connect, and that’s why I try to do something that deviates from our usual routine, like going to the children’s museum or out for chocolate Frosty dinners.

There’s a difference between “knowing how to treat a lady” and being a good person. Manners are important, and you can teach a child how to be respectful without having them try it out on you first.

I work from home so a lot of the time I’m there with him, but I’m not always as present as I’d like to be. So yes, I put my phone away while we sit and eat and we talk about what we see. He likes express buses so we may count the express buses we see go by or maybe we’ll sing a song. Most of the time we just eat our fries in silence. I don’t mind the silence (like I said, he’s not much of a conversationalist), I just like spending time with him where I’m not yelling and he’s not bouncing off the walls.

The first time I even heard about the idea of a mother-son date was last year, when Nikkole Paulum, who was featured on MTV’s 16 and Pregnant wrote a Facebook post about her then-6-year-old son taking her out on a date. In the post, she explained that she made her son take her out on dates so he knows “how to treat a lady.” They go out to dinner and her son has to pull out her chair, open doors for her, and then pay for their dinner with his allowance. I was equal parts confused and appalled. Treat a lady? Open doors? Pay for dinner with his allowance? I can’t even. My son isn’t old enough for an allowance yet, but when he is, I surely wouldn’t expect him to buy me dinner with it. One, it’s still essentially my money, and two, he should be buying toys or books or candy. And he shouldn’t open a door for me because I’m a woman — he should open doors for others because it’s just a nice thing to do.

There’s a difference between “knowing how to treat a lady” and being a good person. Manners are important, and you can teach a child how to be respectful without having them try it out on you first. I’m totally more interested in teaching him that paying for dinner, opening doors, and the like go both ways. Sometimes he may want to do it, and sometimes the person he’s on a date with may want to do it. If he ends up dating a woman, he isn’t obligated to do everything just because he’s a man. This isn’t 1950. Ideas like that are dangerous and antiquated.

At the end of the day, I’m not one to tell anyone how to raise their child or their sons. But if there's one thing I can say I won't ever do, it's that I won't ever tell my son we're going out on a date. I think of it this way: When he goes on his first date with a girl and she asks if he’s dated anyone before, how is it going to be if he’s like, “Oh yeah, me and my mom go on dates all the time”? That girl will hightail it out of there faster than you can say “check, please!”

No matter how you personally use the word date, you cannot deny the sexual undertones and connotations the word carries with it. If you’re OK with the implications of the word, then by all means, go ahead and use it. But if you agree that it’s creepy AF, call it something else. I call them adventures. This way, it's always something special, even if it ends up being nothing more than chicken nuggets and a chocolate Frosty.