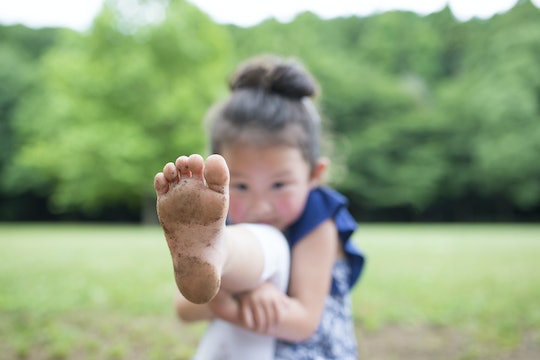 Shoes are an important staple in most people's wardrobes. Although there's undoubtedly some benefits to wearing shoes, such as not worrying too much about stepping in something mysterious and protecting your precious toes from broken glass, are kids better off skipping out on footgear when they're young? Well, according to new research, letting your kid go barefoot may boost their motor skills in some surprising ways.

Researchers from Germany and South Africa analyzed the differences between growing up barefoot or wearing shoes. They worked with a total of 810 children in the trial testing three motor skills through a balance test, standing long jump, and a 20-meter sprint. As reported by the Daily Mail, around half the kids were from rural South Africa, where they often went barefoot. The other half came from Germany, where children wear shoes a majority of the time.

The study — which was published in Frontiers in Pediatrics, according to Science Daily — is "the first to assess the relevance of growing up shod [shoed] vs. barefoot on jumping, balancing, and sprinting motor performance during different stages of childhood and adolescence." The researchers focused on age groups 6 to 10, 11 to 14, and 15 to 18 and their results were pretty surprising.

Children who were habitually barefoot scored higher than children who wore shoes in the balance and jumping tests, with a particularly high improvement seen in the 6 to 10 age group. However, children who regularly wore shoes tested better on the sprint.

"Walking barefoot is widely thought to be more natural, and the use of footwear has long been discussed as an influencing factor on foot health and movement pattern development," Professor Astrid Zech from the University of Jena, Germany, explained, according to Science Daily.

And it seems that there is some truth to the barefoot is natural and better claim. Although the beneficial barefoot effects were found to diminish in the older age groups, the study still points at the benefits of barefoot exercise for motor development, according to Neuroscience News.

Studying the differences between barefoot and shod children is unique, but exploring the benefits of ditching shoes in general is not. According to Daily Mail, walking barefoot is generally believed to help develop muscles and ligaments in feet, along with boosting the strength of the arch.

Remember, humans evolved without shoes, which means our bodies are designed to walk on bare feet. As outlined by Health Guidance, the difference between shoes and going barefoot are actually pretty notable. "If you walk in shoes you have support on your ankle and your bridge and you have a huge heal that pads the bottom of your foot, changes your stride, and alters the angle that you walk," according to Health Guidance.

For anyone having trouble picturing it, consider the shape of a stiletto heel. It may be an extreme example of how shoes change your walk, but it provides a clear example of how footwear can force your walk to change.

Researchers noted that more research needs to be done, particularly when comparing kids who go barefoot and kids who wear shoes in the sprint category. As Professor Zech broke down for Science Daily, the sprint test in South Africa took place outdoors, compared to the German children who run their test indoors. Even for experience barefoot runners, it's hard to beat the speed of someone running inside on a smooth surface.

In addition, the types of shoes may have influenced the results. "South African students run in school shoes, while German students use sneakers or athletic shoes in their physical education classes," Zech told Science Daily.

Still, the general benefits of barefoot existence are clear. With kids spending more time outside now that it's summer, it might be time to ditch their shoes. And for many parents, consider joining them, too.