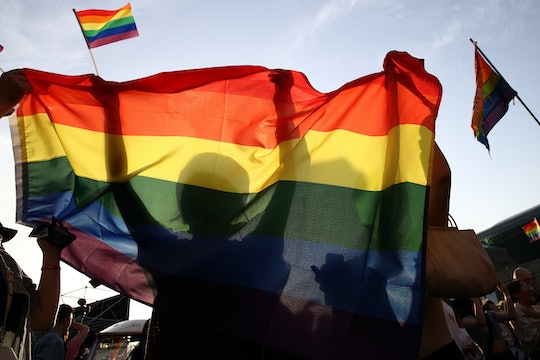 Young people are often credited with having progressive and welcoming ideals, which is why this new report from GLAAD regarding LGBTQ acceptance among millennials is pretty concerning. The organization's fifth annual Accelerating Acceptance Index, which was conducted by The Harris Poll, found that acceptance among Americans aged between 18 to 34 has declined due to a few key and concerning reasons.

For the past five years, GLAAD has conducted what's called the Accelerating Acceptance Index, a national survey among U.S. adults that measures American attitudes toward LGBTQ people, according to the organization's website. The survey is important because it can help inform stakeholders about the potential consequences of anti-LGBTQ rhetoric and policies, to name one benefit.

As for the 2019 report, it's generating headlines due to a finding among young Americans between the ages of 18-34. According to The Daily Beast, the survey determined that LGBTQ acceptance among this group dropped from 53 percent to 45 percent based on the following areas:

Unfortunately, this is the "second consecutive year that this age group has shown a drop" in these areas, according to Variety.

Although the gap between stats from 2017 to 2018 isn't necessarily too high (less than 10 points in each measured area), the overall gist of the findings is concerning. According to USA Today, the report found:

So, what could explain the drop in LGBTQ acceptance among young Americans? GLAAD president and CEO Sarah Kate Ellis partly blamed the findings on America's "divisive rhetoric in politics and culture," stating, according to People: “Last year, when we saw an erosion in LGBTQ acceptance, GLAAD doubled down on our formula for making culture change, and this year that erosion is stemmed."

She continued, “The younger generation has traditionally been thought of as a beacon of progressive values. We have taken that idea for granted and this year’s results show that the sharp and quick rise in divisive rhetoric in politics and culture is having a negative influence on younger Americans and coinciding with a rise in hate and discrimination.”

It's true that the Trump administration has put forth or proposed plenty of anti-LGBTQ policies in the last few years. From banning transgender people from serving in the military to anti-LGBTQ adoption laws, the public is frequently sent messages that this community doesn't deserve equal rights

Another big piece of this puzzle might have to do with the media's reported ambivalence towards the Trump administration's anti-LGBTQ efforts, a supposed trend Media Matters evaluated following a rash of discriminatory policies in May.

"The insufficient reporting on cable and broadcast TV news about the recent attacks on the LGBTQ community plays into the Trump-Pence administration’s strategy of minimizing press coverage of extreme policies coming from federal agencies," the report stated, while noting that, between May 22 and May 31, only two major TV networks covered new anti-LGBTQ policies from the Trump administration.

When outlets ignore these issues, it arguably sends a message to the public at large that LGBTQ people don't matter.

Another factor concerns the idea of "newness," with people adjusting to new "gender identities and sexual orientations," as Ellis told The Daily Beast, adding: "The statistics are counterintuitive to what we believe. But if we stop and think about it for a second, newness takes a while to turn into acceptance. They’re interfacing with new gender identities and sexual orientations, so that takes a minute to get used to."

That all being said, there were some bright spots in GLAAD's report, especially in the area of equal rights. "The majority of non-LGBTQ Americans (80 percent) support equal rights for the LGBTQ community," GLAAD's report stated. "This particular statistic has been consistent since 2016." It remains to be seen how this statistic will fare if millennials continue to show less acceptance towards the LGBTQ community.

All in all, GLAAD's 2019 Accelerating Acceptance Index is an important reminder that there's still a lot of work to be done where it concerns LGBTQ acceptance in America. As Ellis herself noted, LGBTQ rights and equality shouldn't be taken for granted.