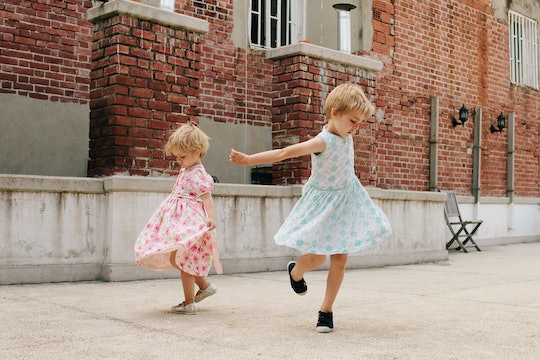 I Don't Want My Kids To Go "Back" To School, I Want Something Better

"Back to school" means a fresh start as students get back to a routine of learning, assignments, and extracurricular events. The beginning of a new school year is exciting even with first-day anxieties, but for some students and families it may mean having to come out of the closet — again — or worse, it could mean some kids have to go back into the closet.

Most schools and classrooms are not affirming spaces for LGBTQIA+ students. According to the Human Rights Campaign’s 2018 LGBTQ Youth Report, only 26% of LGBTQ youth always feel safe in the classroom. This means the vast majority of queer youth don’t feel safe at school. I want better something better for my kids. It’s up to the schools and communities to take the proper steps to make sure every student who begins or returns to school this year walks into an inclusive space.

The number of LGBTQ students is hard to define. The CDC finally added two new questions to their Youth Risk Behavior Survey in 2017. One asked a student’s sexual orientation and the other asked for the gender of their partners. Only 27 states allowed these question on their survey, but enough data was collected to suggest that 8% of high school students in America report being lesbian, gay, or bisexual. This does not capture all 50 states or the kids who are willing to be out themselves, even in an anonymous survey. The CDC has also captured data indicating about 2% of students are transgender.

I have spent hours of unpaid and very emotional labor trying to protect my kids from ignorance and bullying in their schools.

The first thing that needs to happen is a change in responsibility. In most cases, LGBTQ students and families are the ones to lead the charge for change when it comes to making learning spaces safer. We, queer families and parents of queer kids, are the ones who create or demand this change, and we are tired. Some of us are terrified.

As a queer, nonbinary parent with a transgender child, I have spent hours of unpaid and very emotional labor trying to protect my kids from ignorance and bullying in their schools. Ongoing conversations with school leaders, requests for diverse books, and constantly explaining why visible and loud inclusivity is important are exhausting tasks. It is not enough to be quietly accepting. When heteronormativity is the spoken language, teachers need to cut through the gender stereotypes and assumptions of gender and identity based on what society tells kids is “normal.”

Something isn’t lining up when schools say they support LGBTQ students but then the HRC Youth Report shows only 13% of those LGBTQ youth hear positive messages about being LGBTQ in school.

This problem falls directly on the shoulders of the folks running the school. The responsibility needs to shift from parents begging schools to protect their kids to the school districts and superintendents who lead them. Principals, PTOs, school boards, and straight and cisgender allies need to do more. When it comes to allyship, schools and communities are too reactive, when they need to be proactive. There is too much head-in-the-sand, that-doesn’t-happen-here, everything-is-fine ignorance around LGBTQ topics and what straight folks think should be done to support queer folks.

This puts my kids and all other LGBTQ students at an increased risk for depression, anxiety, bullying, and self-harm. LGBTQ youth and teens are 4 times more likely to hurt themselves yet when I and other queer parents take our concerns to administrators, we are told that enough is being done.

Fifth percent of transgender teen boys, 41.8% of nonbinary youth, and 29.9% of transgender girls said they’ve attempted suicide, according to a 2018 Pediatrics study.

Enough is not being done.

We are asked to be patient.

Seventy-seven percent of LGBTQ teenagers felt depressed or down over the past week; more than 70% felt worthless and hopeless.

Patience is not an option.

Educators, when a marginalized voice is telling you what they need, you need to listen. When we tell you it’s not enough, you need to act.

The lack of doing and hesitation from teachers to change their classrooms comes from a lack of training. Once the responsibility of protecting LGBTQ students is truly taken seriously and held by school districts, educators need to be educated thoroughly and often. A one-time or once-per-year surface level training isn’t going to cut it.

Breaking down bias-based bullying, understanding gender well enough to support transgender and nonbinary students, valuing family diversity, and celebrating all forms of gender expression in seamless and affirming ways cannot be expected after a crash course in LGBTQ topics.

Teachers can’t and won’t talk to their students about gender identity, sexuality, and gender stereotypes if they don’t understand these topics in a way they can comfortably talk about them. Silence often comes from fear of messing up or not knowing what to say. According to Gay, Lesbian and Straight Education Network (GLSEN), an organization that works with K–12 schools create safe spaces for LGBTQ students, reported that 83% of educators wanted to provide a safe classroom for LGBTQ kids, but only half had actually taken action.

Too often teachers don’t display visible signs of allyship like Safe Space stickers, transgender and rainbow flags, or pins and name tags that display their pronouns. It’s easier to ignore homophobic comments or conversations that perpetuate the heteronormative narrative when you don’t have the language and confidence to discipline or redirect a student.

High school English teacher Laura Welch confirms this to Romper. “Teachers are afraid of doing or saying the wrong thing and feel remaining silent is safer than hurting someone inadvertently (even though silence hurts)," she explains. "They are so ingrained in their own heteronormative mindset that they either fail to see the need for creating safe spaces or fail to see it as a priority given other tasks they are charged with, including academic and other social emotional responsibilities.”

Too often teachers don’t display visible signs of allyship like Safe Space stickers, transgender and rainbow flags, or pins and name tags that display their pronouns.

Local Pride and LGBTQ centers and LGBTQIA+ advocates offer trainings. Larger, national organizations do too. HRC offers Welcoming Schools, a program with professional development trainings specifically designed to get your school and every classroom adequately prepared for transgender and nonbinary students, students identify as something other than heterosexual, and students who have parents who are queer. GLSEN offers guides for educators too.

Diverse books need to be accessible and read often.

Signs of allyship need to be displayed through stickers and pride flags.

Schools and community members need to feel the same sense of urgency LGBTQ students and families feel about their lack of safety and inclusion.

This is the drive needed for educators to incorporate a LGBTQ-inclusive curriculum that allows queer students and students who we want as allies to see themselves positively represented. LGBTQ history normalizes the people who live on the margins yet contribute to society in important and beautiful ways. LGBTQ-inclusive sex education will reduce the stigma around sex, gender, menstruation, will reduce homo- and transphobia, and will better inform all tweens and teens how to have healthy sexual relationships. Queer kids deserve the right to make informed decisions too.

LGBTQ students deserve the same safety, respect, and learning environments as their heterosexual and cisgender peers.

This means all aspects of a student’s day need to be considered. Are school policies and handbooks inclusive of all genders, identities, and sexual orientations? Are LGBTQ students and families clearly protected from bullying and discrimination? This includes policies that allow students to use bathrooms and locker rooms that align with their gender identity. There should be multiple gender-neutral bathrooms in the school to accommodate nonbinary students and kids who don’t feel safe using gendered bathrooms. It’s important to note that transgender students are at higher risk for sexual assault when their bathroom use is restricted.

I am very aware that these changes can seem overwhelming. They may even come with resistance from staff within the school and parents outside of it.

Because of these results, back to school season means extra work and anxiety for queer parents, parents of a queer kid, and LGBTQ students. That needs to change and that change has to come from educators and school administrators. Teachers, if you truly want to be sure all kids in your class can have a positive learning experience, then demand the tools you need to do so. Administrators: provide the tools.

I recognize that teachers are tasked with almost more than they can handle each day. This is another reason why it’s up to the administration and school district to provide easy-to-access LGBTQ education for teachers. The goal is to work with mindfulness, not add to mental fatigue.

Welch adds, “Knowing how to be honest with ourselves and our students and community has made changing that social programming easier. Explicit, recurring professional development is a must for schools to make the learning culture and climate inclusive and safe for all students.”

Remember, it is about the student's comfort, not yours. You can never do enough or too much to support — likely save — a LGBTQ student.

More Like This
Everyone Told Me To Date Post-Divorce, But Being Alone With My Kids Felt Better
The “Tripledemic” Is Scary, But I Feel Less Helpless When I Wear A Mask
New Study Finds Brains Of Teens Who Lived Through The Pandemic Aged Faster
21 A+ Christmas Gifts For Teachers