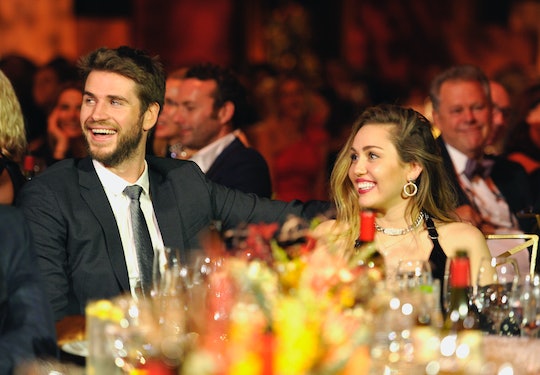 When it comes to celebrity rumors, there's nothing as pervasive and widespread as the pregnancy tales. It seems like every other day there are tabloids lining the checkouts at grocery stores incorrectly proclaiming that another young actress is expecting. However, for this young family, a lot of kids is on the agenda, it's just a matter of timing. Liam Hemsworth wants kids with Miley Cyrus, and to be honest, it's a really heartwarming moment.

In an interview he did for the cover of Australian GQ this month, Hemsworth opened up about his life in the aftermath of the California fires that devastated his and Cyrus' house last year, and what their marriage is like as a whole.

In reference to the rumors they have to field, Hemsworth explained that he often has to clarify things for even his closest friends and family. “Yeah, I’ve been getting married for years now. We’ve been fake married about a billion times," he said. "I can’t tell you how many calls and texts I’ve got over the last five years from best friends – even from my parents sometimes — they’re like, ‘Did you get married? Is it real this time? Did you have a baby?’”

As for a real baby? Well, it's in the plan, but right now, the couple is focused on taking care of their fur children. “Yeah, one day,” he says about having a family. “Once we don’t have so many dogs. You couldn’t bring a baby into our house right now. But one day, we’ll know when it’s right. But right now? Not for the time being.” As for how many? He added: “Of kids? 10, 15, maybe 20.”

In the same interview, Hemsworth opened up about his relationship with Cyrus, which has been going on for about a decade. He explained that though their connection was instant, and strong, it was actually the fires that devastated their home last year that inspired them to tie the knot.

“I was 18 when I met Miley,” he began. “We really fell in love quickly and had a really strong connection from the beginning, and I think in the back of my head I knew it was on the cards, but we weren’t planning to have a wedding anytime soon. Then just going through something this emotional with someone, it brings you closer and we felt like we’d lost a big part of our lives, so we wanted to make a new part of our lives. It was something really good coming out of a horrible situation. It was going to happen eventually, but I think this just sped it up a little bit.”

Despite their no-rush attitude, it seems the world is eager to welcome a new little Cyworth into the world (we made up that name and we're trademarking it). In fact, it was just earlier this year that Cyrus has to shut down pregnancy rumors yet again, after ELLE reported some sites were claiming she was expecting.

"I’m not 'Egg-xpecting' but it’s 'Egg-celent' to hear everyone is so 'Happy For Us' .... we’re happy for us too! 'Egg-cited' for this next chapter in our lives..." she wrote in a post. "Now, can everyone leave me alone and go back to staring at an egg," she concluded, referencing the viral egg that became the most liked photo on Instagram earlier this year, in place of Kylie Jenner's pregnancy announcement.

One day, hopefully we'll be looking at one of Cyrus' own pregnancy announcements, but we're happy to wait until the couple is ready. What matters is that they are happy, which they very much seem to be.