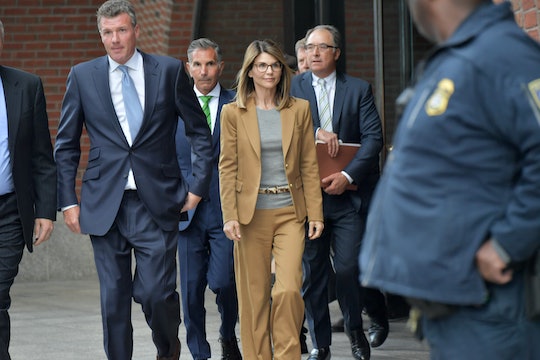 It's Happening. Lifetime Is Turning The College Admissions Scandal Into A Movie

The college admissions scandal was nothing short of shocking. Not only was the public aghast at the fact that well-off families were essentially bribing their kids' way into prestigious colleges, but several high-profile celebrities, including Full House star Lori Loughlin and actress Felicity Huffman, were at the center of it. It seemed to have all the elements of an over-the-top film and, well, now it's going to be one. Indeed, Lifetime's upcoming movie about the college admissions scandal will become a reality soon enough and it's sure to be dramatic. After all, drama is what Lifetime does best.

In a press release obtained by ELLE, the network officially announced earlier this week that it's producing a 2-hour TV film about the college admissions scandal. And, perhaps unsurprisingly, neither Loughlin nor Huffman will appear in the film, as The Blast reported. Lifetime said in the press release that the film will be called College Admissions Scandal, which seems pretty straight-forward, however People reported that the name may change and the press release didn't explicitly state who exactly the plot is framed after.

"College Admissions Scandal will follow two wealthy mothers who share an obsession with getting their teenagers into the best possible college," the press release stated, according to The Cut. "When charismatic college-admissions consultant Rick Singer offers a side door into the prestigious institutions of their dreams, they willingly partake with visions of coveted acceptance letters in their heads. But when Singer cooperates with the FBI and pleads guilty, the mothers, who risked everything for their kids, must face the consequences of their crimes and the loss of trust and respect from their families."

So it seems like the film will be pretty similar to the real-life drama that unfolded in the college admissions scandal.

While Lifetime works to get the film together, Loughlin and Huffman are dealing with the real-life repercussions of the actions they've been accused of. Back in May, Huffman pleaded guilty "to paying $15,000 to a fake charity that facilitated cheating when her daughter took the SATs for college admission," as CNN reported at the time, which noted that she's expected to be sentenced on Sept. 13

"I am in full acceptance of my guilt, and with deep regret and shame over what I have done, I accept full responsibility for my actions and will accept the consequences that stem from those actions," Huffman said in a statement earlier this year, according to the Los Angeles Times.

As for Loughlin, she and her husband Mossimo Giannulli pleaded not guilty to two conspiracy charges in the scandal dubbed "Operation Varsity Blues," according to Vanity Fair. The pair also waived their right to appear in court for an arraignment, according to NPR, which added Loughlin and Giannulli face charges including "one count of conspiracy to commit mail and wire fraud and honest-services mail and wire fraud, as well as one count of conspiracy to commit money laundering." Prosecutors alleged that Loughlin and Giannulli paid $500,000 to have their two daughters admitted to the University of Southern California "as crew-team recruits," though neither played the sport, CBS News reported.

Reps for Loughlin and Huffman have not yet returned Romper's requests for comment.

Lifetime hasn't yet announced an airdate for College Admissions Scandal, but it seems there's still plenty of real-life drama surrounding the case to hold you over until then.