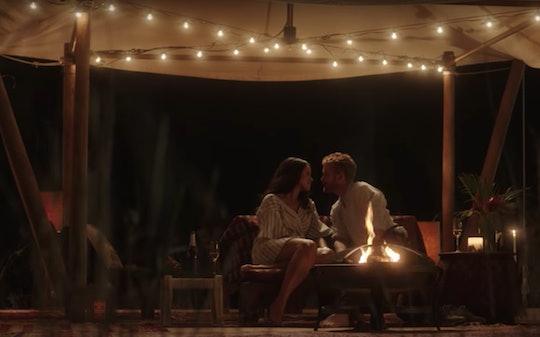 Listen, if there's one thing that Lifetime does well, it's make wonderfully cheesy, romantic movies. And Lifetime does that better than anyone out there, although there are definitely competitors. But now, the network has truly outdone itself. Lifetime's movie about Prince Harry and Meghan Markle now has not one but two new trailers, and you seriously have to see them. Yes, while die-hard Lifetime fans know that the best time to tune into the network is traditionally around the Holiday season, Lifetime will be bringing fans into the fold with a new flick as early as May of this year. And it's all thanks to the upcoming royal wedding.

Obviously, the biggest event of the season will take place when Prince Harry and Meghan Markle officially tie the knot, at a lavish (but not as lavish as Prince William and Kate Middleton's wedding) ceremony on May 19, 2018. But, just six days before that big event, Lifetime will be premiering their own take on the two lovebirds, entitled, Harry & Meghan: A Royal Romance.

Obviously, the movie will be a little cheesy, and a little fictional, but nevertheless, it will be worth watching. And now, that Lifetime has released two new trailers, one from Markle's perspective, and one from Prince Harry's, it's clear that the upcoming movie is going to be seriously epic.

Previously, Lifetime had only released one trailer for the made-for-TV-movie, which simply offered an outline of the couple's courtship. Now, the network has given fans two more glimpses into the upcoming movie, with one focusing on Markle's journey towards Prince Harry, and the other vice versa. The original trailer was definitely more of a teaser, and while these newest trailers (which you can check out here) are only 30 seconds each, they're still totally exciting.

So, how accurate will this Lifetime movie be? Well, according to the network's description of the flick, it will largely focus on details of their relationship that are already pretty well-known:

Chronicling the courtship and love story between a beloved prince and his new fiancée, the film will examine the history of Prince Harry (Murray Fraser) and Meghan Markle (Parisa Fitz-Henley) from the moment they met after being set up by friends, through their initial courtship when they were able to keep their romance under wraps, and ultimately the intense global media attention surrounding their relationship and Meghan’s life as a divorced American actress.

Watch both trailers below ...

And in these newest trailers, it's clear that A Royal Romance is definitely going to be a tear-jerker, whether or not you've been obsessing over the couple's relationship. Really though, aren't all Lifetime movies pretty intense? It's pretty unsurprising, but the movie is still likely to be a smash hit.

Looking back, Lifetime has also turned another pretty big royal wedding into a semi-successful made-for-TV-movie, William & Kate: The Movie. Of course, that film wasn't exactly too well-received, likely because it was made so quickly. According to The Daily Beast, the movie was awkward and rushed. "It's impossible to escape just how cheesy this film is, even by Lifetime standards, and how much it plays fast and loose with reality," the website reported.

In real life, though, Markle and Prince Harry probably had a lot less torrid of an affair than A Royal Romance makes it seem, although it was certainly intense at points. Shortly after the couple's relationship was made public back in 2016, Prince Harry released a statement detailing his disappointment at the media's coverage of Markle. In part, the statement read:

So, there's definitely plenty of drama for Lifetime to work with, but hopefully, it will remain as accurate as possible. And if not, at least it'll be fun to watch.