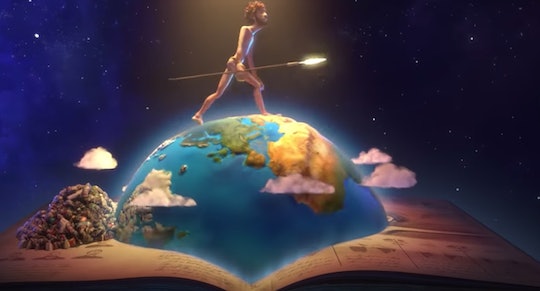 Lil' Dicky's "Earth" Is Celeb-Packed, & On A Mission To Fight Climate Change

If you're like me, then you might have seen a music video by Lil' Dicky was trending at #1 on YouTube on Saturday, April 20. And the first thing that came to mind was, "Wait, who is Lil' Dicky." I'll be the first to admit that don't really follow the rap scene. But trust me, you're going to want to check out this particular video. Why, you ask? Because Lil' Dicky's "Earth" features Ariana Grande, Justin Bieber, and a million other celebs on a mission to fight climate change.

For starters, don't judge. But a quick online search revealed that Lil' Dicky is actually a comedian/rapper (with an emphasis on the comedy) who hails from Pennsylvania. (Basically, he's hilarious and can also rap ridiculously well.) But for his most recent collaboration — which dropped on Friday, April 19, according to NPR — Lil' Dicky tackled a very serious subject: Climate change. His new music video "Earth" features cameos by nearly two dozen celebrities, including Ariana Grande, Justin Bieber, and Leonardo DiCaprio.

The video begins with TV reports of forrest fires in California, trash in the streets, air pollution, and Lil' Dicky walking down a sidewalk near group of young boys — who immediately start harassing him for a trash can they knocked over. "Hey, are you Lil' Dicky?" one of the kids asks.

"Yo Lil' Dicky, my brother says you suck," another boy declares.

"Okay, your brother probably sucks," the rapper shoots back. "Look how you turned out, you're a rat. Your whole household is probably completely mismanaged."

"Hey, suck my butt, Lil' Dicky," yet another kid shouts.

Totally random? Absolutely. (But also hilarious, right?) One of the boys ends up finding a book that fell out of the trash can. Viewers are then transported into an animated world showcasing the wonderful plant and wildlife of our planet.

The whole video is pretty trippy, to be honest. Yet, also kind of perfect. Twitter seems to think so, too. One Twitter user wrote, "You want to educate young people about global warming? Have Lil Dicky explain it."

Another person tweeted, "Yo I really hope Lil Dicky is the one to start a movement to save the planet. Like y’all need to REALIZE WHATS WRONG and DO SOMETHING."

Yet another Twitter user wrote, "Everyone please listen to Lil Dicky’s Earth, because not only is it a banger, but every stream contributes to conservation efforts!!!"

One of my favorite parts is toward the end, when Lil' Dicky gets to the heart of the issue. "Have you been to Earth?" Ariana Grande (as a zebra) sings.

"Everyone who's listening has been to earth, Ariana. We're not making music for aliens here," he replies.

"Are we gonna die?" asks Justin Bieber (as a monkey.)

"You know what, Bieber, we might die. I'm not gonna lie to ya." Lil' Dicky says. "I mean, there are so many people out there who don't think global warming is a real thing. We gotta save this planet. We're being stupid." He goes on to say that if aliens did come, we should send Leonardo DiCaprio as our rep. Because he know's what's up.

Another favorite? Computer-animated Leo DiCaprio holding the Earth aboard the Titanic.

"Any words, Leo?" Lil' Dicky says to the actor.

"This might be my favorite song ever," DiCaprio replies. "It's awesome." LOL.

Apparently, the epic music video took nearly three years to create. "All of a sudden, I’m at Leo’s house and we’re talking about it. One thing I can tell you about that guy is he actually cares. It’s not a front," Lil' Dicky told Rolling Stone. "It’s just me and him talking and he’s getting so worked up to the point of anger talking about how it’s crazy that people aren’t really caring about this stuff. I could tell how much he cared. It felt like a very organic collaboration." He continued:

I didn’t know that we literally have 12 years to completely change how we do so many things on Earth, from a fundamental standpoint, or the damage will be irreversible and in our lifetimes we’re going to experience such drastic impact. Upon realizing that, it went from a silly song about animals to, 'Oh my God, this is the most important thing I’ll ever do.'

And it very well could be. At the time of publishing this article, it had more than 15 million views.

The video then encourages viewers to check out WeLoveTheEarth.org to learn more about climate change — and to support the effort to save our planet. Another cool thing? Profits that come from the sale of this song are going to the Earth. You can also buy some cool swag to support the cause. Let's help spread the word and save our Earth!