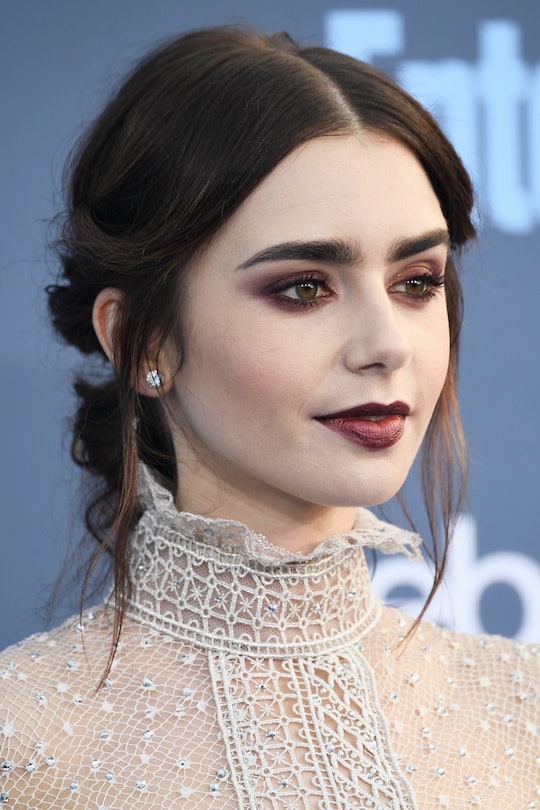 Moms are there for our first words, first steps, and if you're Lily Collins, first Golden Globe nomination. This morning, Lily Collins posted her Golden Globe nomination reaction to Instagram, and it's humbly adorable. Collins' mother captured the candid moment when she was nominated for Best Actress in a Motion Picture – Comedy or Musical— for her role as Marla Mabrey in Warren Beatty's Rules Don't Apply. Annette Bening, Mathew Broderick, and Alden Ehrenreich also appear in the comedy-drama about an actress and her driver's forbidden relationship in '50s Hollywood.

The starlet looked genuinely shocked in her Insta photo — and very comfy, I must say. Donning a plush grey sweatshirt (the kind that you can just imagine yourself living in forever), and what looks like leggings alongside two remotes on a couch. The moment looks pretty authentic to me, and it's sweet that she was alongside her mama-bear when discovering the good news. The occasion is a relatable one, similar to opening a college acceptance letter to your dream school. With her hand over her surprised face in the image, Collins captioned the photo as such:

"The moment your mom captures you being nominated for your first Golden Globe. Priceless. I still can't breathe. Beyond honored, thankful, and proud. This can't be real!..."

Awww, she sounds so down-to-earth and unpretentious. And just look at her face: such a cutie, effortlessly pulling off nude nails, and morning hair!

Success is in her D.N.A., and we've already seen the acting abilities of Phil Collins' daughter in Mirror, Mirror, and The Mortal Instruments: City of Bones, so it's exciting so see what filmic moves The Blind Side actress will make next.