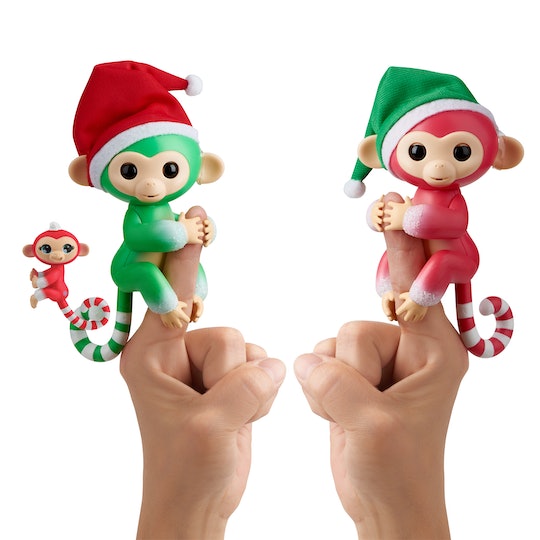 Limited Edition Fingerlings Are Coming On Black Friday So Get Excited

With the arrival of this upcoming holiday season, so many kids will be demanding new toys from their parents this Christmas. Last year, the super cute toy, Fingerlings, took Christmas wish lists by storm — and are likely to do the same this year. So, parents (and kids) should get excited that limited edition fingerlings are here for the holidays, because they could not be any cuter.

There are so many good deals to take advantage of on Black Friday — the one day out of the year on the day after Thanksgiving where every item in every store seemingly goes on sale. And since Black Friday is only two weeks away, it's understandable why some people are already scoping out these amazing sales at their favorite stores — because it requires some expert navigation. This year, parents should seriously consider making a stop at their local Wal-Mart to purchase gifts for everyone (especially the kids) in their families — because this new Fingerlings release will be too good to pass up.

On Black Friday (Nov. 23), two new sets of limited edition Fingerlings will be released in Wal-Mart stores — and the sets are so adorable, both kids and parents will love them.

The first limited edition set will get everyone in the holiday mood. The set comes with two holiday colored Fingerlings (named Holly and Jolly — adorable) with the sweetest candy cane tails and Santa hats. As if the collection could not be any cuter, it also comes with a special mini monkey (named Merry) that can clip on to the Fingerlings themselves or on your own things.

The second set is just as cute and perfect for every season, not just the holidays. The dragon and unicorn Fingerlings — named Bubble and Becca (and their clip on monkey friend named Bianca) — are super mythical, mystical, and absolutely adorable. This is one set that is going to go fast because it is the first time that the dragon and unicorn Fingerlings will be sold together.

The sets are a pretty great deal — each of them cost $29.99 (making each Fingerling in the set $15 each) and can be purchased in stores on Thanksgiving night, starting at 6 p.m. when Wal-Mart opens its doors for the Black Friday shopping crowd, according to Business Insider. But if Black Friday crowds sound a little scary, they can also be purchased online on Wal-Mart's website starting on Black Friday.

As previously stated, this isn't one Black Friday deal that parents can pass on or revisit at a later time. If last year was any indication, these special edition Fingerlings will go by fast. In 2017, Fingerlings took the toy world by storm. Stores were selling out of the super cute animatronic animals in September, months before Christmas, according to TIME — and the unicorn Fingerling was a huge hit with kids. Some parents even traveled out of state in search for the toys, according to USA Today. But at the same time, it's super easy to see why kids are obsessed with the toy — they're fun to collect, play with, and interact with, according to Lifehacker.

This year, the craze over these toys is likely to be just as big. Considering that there are currently dragon and unicorn Fingerlings being re-sold on Ebay for almost $25 each, it's easy to assume that these limited edition sets will make their way to the website once Black Friday is over.

So what can parents do to make sure this doesn't happen to them? Set their alarms for 6 p.m. on Thanksgiving (after taking that post-meal nap) and get in line at their local Wal-Mart store. This is one Black Friday deal that will be too good to pass up.