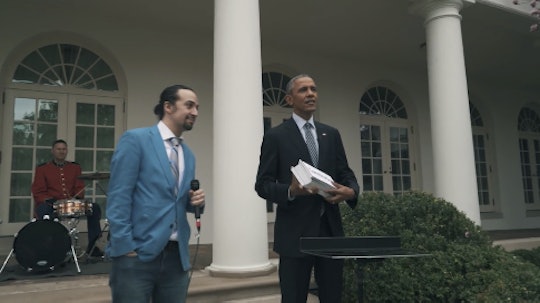 In case you needed any more proof that he's totally with it, watching Lin-Manuel Miranda freestyle for President Obama will just about do it. As The New York Times put it on Tuesday, Obama's "most recent executive order was to drop a beat." (Coolest presidential moment ever?) During a White House visit from the entire cast and crew of Hamilton on Monday, Broadway sensation Miranda freestyled in the Rose Garden, taking cues from Obama, who flipped through placards with political terms and buzzwords like "Supreme Court," "Obamacare," and "innovation."

It was an awesome opportunity to get a (free) peek at the Hamilton talent as it was to watch Obama be genuinely impressed with Miranda's abilities. Miranda was 100 percent adept at thinking on his toes and finding a flow to fit the president's prompts — in short: He nailed it.

“Immigrants, we get the job done/This is so fun/POTUS is holding up the signs/I’m not done,” was one sample line. Afterward, the president and Miranda embraced and laughed. Obama even knew how much everyone on Twitter was going to like it. "That’s going viral," he joked later.

The president, like pretty much everyone else in the nation, is a big fan of Hamilton, which he's unfairly been to see twice this year. (I get that he's the "leader of the free world" and all, but doesn't he know how hard it is to get tickets for the rest of us? Come on, man.)

Obama liked the show so much that he even admitted it might be the only thing he and former Vice President Dick Cheney agree on. It's hard to imagine Cheney getting into a story about Alexander Hamilton told through R&B and hip-hop, but such is the state of America these days (or maybe that's just how good the show is, which I wouldn't know, because politicians keep taking all the seats).

The Rose Garden rap session is a little bittersweet though. As Obama's presidency comes to a close, he keeps doing things that have me already missing him. This week, he sat down with Misty Copeland to talk about body image. He met with Kendrick Lamar. And even invited Canada's very own McDreamy Prime Minister Justin Trudeau to dinner. You don't have to agree with his every policy to appreciate the guy: Obama is just one of those politicians with whom you'd actually want to have a drink. I mean, who can forget about his video to promote signing up for the Affordable Care Act, shooting hoops in the West Wing, and making fun of himself?

I'm sure that first lady Michelle and daughters Malia, and Sasha are mortified at every GIF and corny dad-joke because he probably isn't that cool in real life. In fact, it's quite possible that the first lady is definitely, totally more "with it" than her husband. She exudes cool.

Either way, Miranda's freestyle rap seems to have given politicians and voters a welcome break from the constant stream of nasty, 2016 election madness. Let's just hope the next president makes even a third of the effort to engage with pop culture the Obama's did in the past eight years because, let's face it: It sort of works.