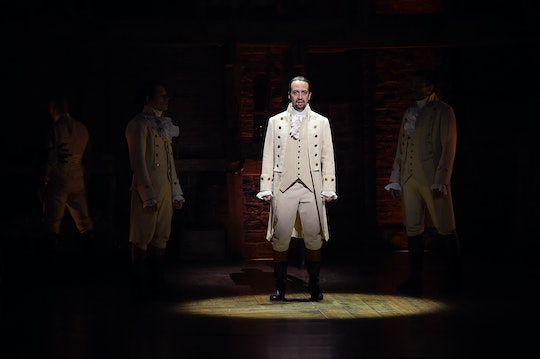 Lin-Manuel Miranda isn't just the man behind the hottest ticket on Broadway, Hamilton. No, he's a dad of a young son, Sebastian, with a message for other parents about how his childhood influenced his explosive creative genius. So what is Lin-Manuel Miranda's advice for parents? Less parenting, more creative outlets (including TV).

It sounds counter-intuitive at a time when extreme helicopter parenting has become the default. But for kids like Miranda and millions of others who came of age during the 1970 and '80s, a time when kids were kids and adults watched Dallas, what might look like neglect and disinterest today was just how it was done — with the onus on the rug rats to entertain themselves. And that time to dream and play in your own head, Miranda said, is critically important for kids.

"Time alone is the gift of self-entertainment—and that is the font of creativity," Miranda said in an interview with GQ. "Because there is nothing better to spur creativity than a blank page or an empty bedroom."

Miranda said he and his sister, like plenty of kids in the 1980s and 1990s, were what were called "latch key kids," meaning they came home after school and looked after themselves while their parents worked until the evenings. The siblings watched TV, listened to music, and sometimes were just plain old bored — all of which contributed, Miranda said, to his ability to create.

And he's passing it on to the next generation.

So if you're a parent who wants to encourage your kids to become the next creative genius to take America by storm, Miranda's advice to you is to schedule less, intervene less, and hover less. Maybe TV and screen time isn't such a toxic thing. Maybe leaving your kids alone to play for the afternoon without a planned activity doesn't make you lazy, maybe it makes you the parent of the next Pulitzer Prize-winning Broadway star.

Because when you think about it, what is the single luxury everyone wishes they had? Time. Time to watch bad TV and just wile away hours reading books or playing music or daydreaming. There's nothing better for the soul or recharging for your creativity. So maybe Miranda is right, and giving them a bit more time to themselves is exactly what our kids need.

Plus, I'm convinced Miranda is the coolest Dad in America.

Also, does anyone know how I can get into this mommy group?

Every child and every parent are different and there is no one singular right way to raise a kid — a parenting mantra always worth repeating. But in the Pinterest-perfect, social media-facing modern world, where parenting is often treated like a competitive sport instead of the long, complicated journey that it is, it's nice to remind ourselves that our parents had a vastly more laid back approach, and we turned out fine. And there was benefit from our afternoons spent taking care of ourselves and weekends outside running around the neighborhood.

But don't take my word for it. Listen to the genius himself explain his parenting philosophy.

As a kid, I had an obsession with Hollywood stunts. People falling off buildings. Catching on fire. Getting shot. And you are thinking right now, Where can this lead? Well, every night, when I play Hamilton and Aaron Burr shoots me, I whip around and collapse, and there is a part of my brain that is 9 years old, thinking, Does that look real?!