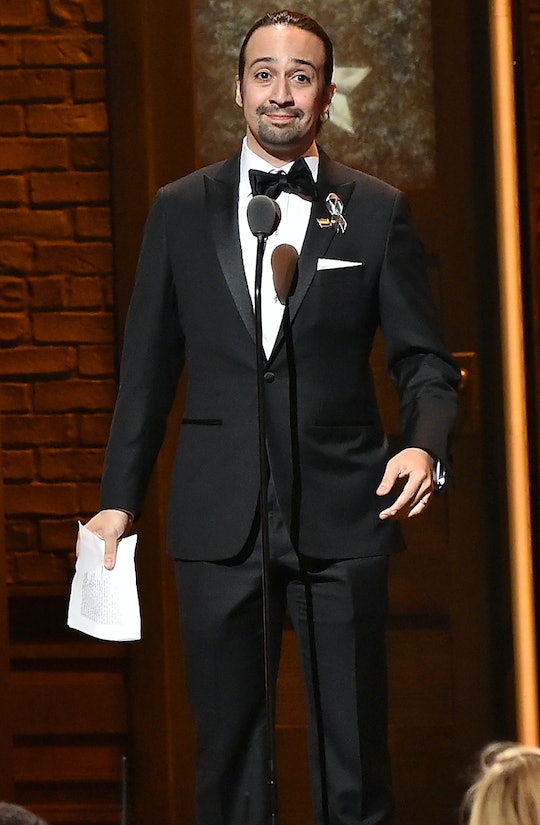 Lin-Manuel Miranda's Tonys Acceptance Speech Will Blow You Away — Transcript

Besides being known for his award-winning musical, Hamilton, Lin-Manuel Miranda has become known for his award speeches. A master lyricist, the Broadway star has made it a habit of rapping his award speeches in a fun and authentic way that is fun for the crowd and people tend to watch them over and over again on YouTube. He rapped his way through an emotional acceptance speech when Hamilton won the Grammy for Best Musical Theater Album earlier this year, but this year in light of the Orlando shooting, Miranda's Tony acceptance speech for Best Original Score was not a freestyle but a sonnet instead. Still it was just as powerful.

My wife's the reason anything gets done.

She nudges me towards promise by degrees.

She's the perfect symphony of one.

Our son is her most beautiful reprise.

We chase the melodies that seem to find us until they're finish songs and start to play.

When senseless acts of tragedy remind us that nothing here is promised. Not one day.

This show is proof that history remembers

we live through times when hate and fear seem stronger.

We rise and fall and light from dying embers.

I say that as symphony. Eliza tells her story. Now fill the world with music, love, and pride.

Thank you so much for this.

Awe-inspiring and heartfelt, Miranda's 2016 Tony acceptance speech will probably be watched over and over again. Filled with love and a reminder that love above all is stronger than any hate, Miranda reminded everyone watching not to give up hope and to stay strong especially in moments of tragedy.

If you missed watching the speech live you can watch it below:

Fans quickly took to Twitter, thanking and praising Miranda for his awe-inspiring speech.

Although it wasn't the rap many were expecting, Miranda's sonnet said exactly what needed to be said in the most beautiful way, and it won't soon be forgotten.