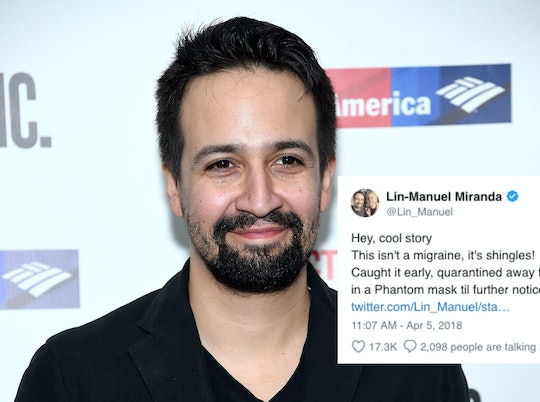 A Twitter saga written by the creator of Hamilton led to comical mix-up on Friday morning, but Lin-Manuel Miranda's tweets about his shingles also bring up an important point that all parents need to know. It all started on Tuesday, when Miranda tweeted that he was suffering from "the worst migraine of my life." The next day, he provided an update: he'd gone to the doctor, and it turned out that he had shingles. Miranda also said that he was "quarantined away from the baby" and wearing a "Phantom mask," and later tweeted about having blurred vision.

In a wacky misunderstanding that rivaled a Three's Company plot line, the Associated Press reported on the tweets, implying that Miranda's blurred vision was a symptom of the shingles, and that he was "wearing a mask during treatment," which is kind of adorable, because I know maybe three facts about musical theater, and even I'm familiar with Phantom of the Opera, in which some dude (or a ghost, whatever, who cares) wears a mask that covers half of his face. Miranda clarified on Friday that his blurred vision was a normal result after having his eyes dilated by his ophthalmologist, and the mask reference was a joke. But there's another detail in there that's no joke at all.

Miranda and his wife, Vanessa Nadal, just welcomed their second child back in February, according to Billboard. That makes their son, Francisco, just eight weeks old, and yes, his dad really does need to be "quarantined away" from him while his shingles virus is active. Shingles is caused by the varicella-zoster virus, the same virus that causes chickenpox. If you had chickenpox as a child, that virus is hanging around in your spinal cord just waiting to reactivate and cause shingles, according to the Mayo Clinic. Not everyone who had chickenpox will get shingles, but there's always a risk.

Since you don't technically "catch" shingles, you might think that you don't have to worry about being contagious. But you can pass on the varicella-zoster virus to others; instead of developing shingles, though, they'll get chickenpox. That's particularly dangerous for Francisco, and his 3-year-old brother, Sebastian, because they're almost definitely not immune to the virus at their ages. Kids typically receive the chickenpox vaccine in two doses, with the first one around 12 to 15 months of age, and the second between ages 4 and 6, according to Healthline, so Sebastian probably hasn't had his second dose yet, and Francisco hasn't had either.

The chickenpox vaccine was first introduced in the mid-1990s; before that, it was considered a common childhood disease, even a rite of passage. Some parents would even intentionally allow their kids to get infected, because they wanted to get it over with as soon as possible (chickenpox infection almost never recurs, and the symptoms worsen with age). If you had chickenpox as a kid, you may remember the itchy bumps and blisters as a mild annoyance that was totally worth spending two weeks home from school, but it can also lead to dehydration, infections, pneumonia, and encephalitis. Before the vaccine was introduced in the United States, chickenpox sent over 10,500 people to the hospital every year, and about 100-150 people died, according to the Centers for Disease Control. Yes, kids died from chickenpox. It's serious.

Now that I have you sufficiently freaked out, here's some good news: there is a shingles vaccine for people who have had chickenpox. The bad news is that it's generally only recommended for people over 50, as the disease is most common among older people, but if you've already had shingles before, it can come back, so it's worth a call to your doctor. In the meantime, if you suddenly find yourself experiencing pain, burning, numbness, or tingling that turns into an itchy red rash (with or without the less-common headache that Miranda had) get the hell out of the house.