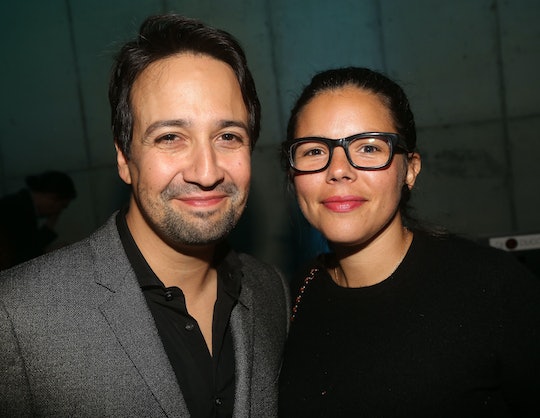 With the holidays literally around the corner, the school days are winding down as kids gear up for festive programs. Most parents would probably agree there's just something about seeing your child up on stage singing at this time of the year that tugs at the old heartstrings. In fact, I can almost guarantee Lin-Manuel Miranda's video from his kid's holiday concert will leave you with a few tears in your eyes.

Like plenty of parents in December, the creator and star of the broadway musical Hamilton and his wife, Vanessa Nadal, recently attended a holiday concert. The couple share two sons — Sebastian, 5, and Francisco, 1 — so it was likely Sebastian who was performing the evening of Thursday, Dec. 19, when Miranda shared a video from the concert.

Interestingly, the proud father wasn't even recording his son; he was actually filming his and his wife's reactions to hearing the children sing "Edelweiss." Miranda captioned the video clip — which showed the couple obviously moved by the kids' voices — with, "From our kid’s holiday concert to yours." Take a look at the touching video, below, and try not to cry.

Judging by the reactions on Twitter, plenty of Miranda's followers were reduced to tears while watching the clip. And it didn't matter where they happened to be. One Twitter user commented, "WHY AM I CRYING ON THE L RIGHT NOW."

Another follower wrote, "Me: expecting some rowdy Jingle Bells Me: Crying because it's littles singing Edelweiss and I CANNOT.

Yet another Twitter user declared, "Every time you tweet something like that I think "that's it this is the cutest thing I've ever seen" and somehow you top the last cutest thing with a new cutest thing every single time."

Miranda also commented on his original post with a photograph of his parents. And let's just say grandma appeared less than thrilled to be at the holiday concert. "Abuela really thought she was done w holiday concerts," Miranda captioned the photo, adding laugh-crying emojis for good measure.

Seriously, though, Lin-Manuel Miranda just seems like such an awesome dad. His comments during a June interview with the Austin-American Statesman only solidify this opinion for me.

"I think your biggest job as a parent — and I try to do this every day, I'm sure I fall short, but it's what we try to do — is to instill empathy in our children," he said at the time, reflecting on fatherhood. "Because I think that's the magic bullet for everything else. If you can walk a mile in someone else's shoes, if you can imagine what they're going through, you're a better person. You're a better collaborator. You're a better friend. You're a better sibling. And so that's what we work the hardest on."

Miranda made another solid point about parenthood, in that it's almost like re-living your own childhood in some times. "It really is a time machine to have children because everything you struggled through, you watch your kids go through it at every age," he told the Austin-American Statesman. "And so it's been one of the great joys of my life."