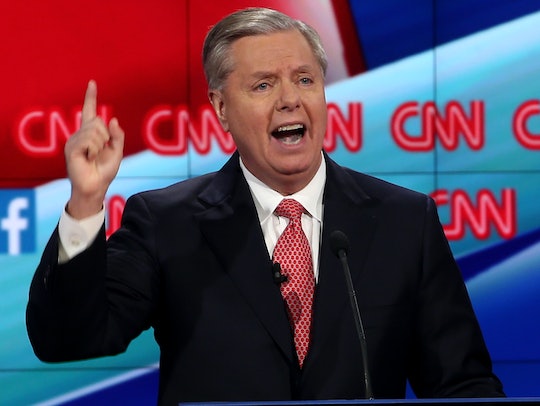 Lindsey Graham Drops Out Of Republican Presidential Field, Saying He "Hit A Wall"

South Carolina Sen. Lindsey Graham dropped out of the presidential race Monday, according to CNN. Graham told CNN's Kate Bolduan that he "has hit a wall" in the race for the Republican nomination. CNN said Graham was serious and emotional as he delivered the information, saying he wouldn't give up on helping the country.

Graham was momentarily famous among the Republicans when he quoted The Princess Bride during the CNN Republican presidential debate last week. After Texas Sen. Ted Cruz quoted the movie, Graham attacked Cruz's foreign policy using the movie. "Ted, getting in bed with Iran and Russia to save (Syrian President Bashar Al-)Assad is inconceivable!" Graham joked, according to CNN. "Princess Buttercup would not like this."

It was Graham's attempt at being funny, and some people got it. But, throughout the Republican race, Graham has polled at just one percent support, though the most recent CNN/ORC national poll had him barely reaching that amount. In his interview Monday with Bolduan, Graham said, "I'm going to suspend my campaign. I'm not going to suspend my desire to help the country."

Graham campaigned with the hopes of drawing attention to national security and his interventionist foreign policy plans, according to NBC News. Graham told CNN that his campaign just wasn't getting traction among the leading Republican candidates like Donald Trump, whom Graham has been seriously critical of in the past few weeks, according to Politico:

We’ve come to a point now where I just don’t see how we grow the campaign without getting on the main stage. One of the biggest problems we’ve had was to get our voice on equal footing with others. This second-tier debate process has been difficult for us. I think we’ve done well in the debates, it’s just hard to break through because the buzz doesn’t last very long.

During the last debate, where Graham debated as part of the "undercard" stage, he apologized to Muslims for Trump's call that they should be banned from entering the U.S. and that the country ought to investigate mosques, according to NBC:

To all of our Muslim friends throughout the world, like the King of Jordan and the President of Egypt, I am sorry. He does not represent us.

Graham's endorsement could mean something for the leading Republican candidates going into the Feb. 20 primary in South Carolina, but it's unclear whom he might endorse. Politico reported that he likely won't endorse Trump or Cruz, who are the leading candidates among the field and also the candidates Graham has been most critical of.

Graham's ally and supporter Sen. John McCain said in a statement that he was disappointed Graham had to leave the race, according to NBC:

Republicans lost our most qualified, thoughtful, fearless and honest presidential candidate, not to mention the candidate with the best (and it seemed sometimes the only) sense of humor.

Graham told CNN that he plans on taking some time to be with his family next and that he has no plans to endorse any candidate in the immediate future.