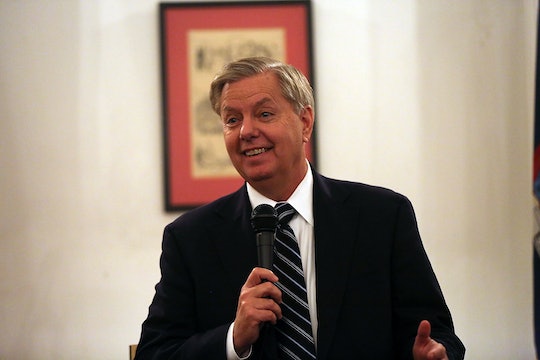 You may not have heard of Republican presidential hopeful Sen. Lindsey Graham, as he has not appeared in either of the last two "varsity" Republican debates, but what he just said is sure to put him on your radar — regardless of your political affiliation. Believe it or not (hint: you should believe it!), Graham warned the GOP that their pro-life stance would lose them women voters, and he's 100 percent right.

At Thursday’s Republican Jewish Coalition, Sen. Graham shared the stage with Sen. Ted Cruz. While Graham was slated to talk foreign policy, Cruz’s speech apparently compelled him to shift gears entirely and “take issue” with some of his fellow senator’s positions. So what did he talk about? Immigration and abortion. But he didn't tow the party line.

Gra­ham departed from the usual GOP rhetoric and warned his rivals that their hard and inflexible stances on immigration and abor­tion would harm the party’s chances to win back the White House. Whether his intentions in making these comments were to gain voters or were actually a representation of his beliefs and opinions (or both) is not entirely clear, but it doesn’t matter. What matters is that he said things few other GOP candidates, and that is huge:

It’s not about turning out evangelical Christians, it’s about repairing the damage done by incredibly hateful rhetoric driving a wall between us and the fastest-growing demographic in America. It’s about looking Hispanic Americans in the eye and saying, ‘We get it, be part of our cause.’

While Graham did eventually touch on foreign policy, it was not the speech anyone expected. (Graham even joked: “Not the speech you thought you were go­ing to hear, huh? Not the speech I thought I was go­ing to give.”) But I think Graham gave this speech because he knows he's not going to win, and so he had a choice: Spew the usual GOP-friendly sound bytes or challenge them and actually say something of substance. He chose the latter.

Because there's truth to what he's saying. Young Republicans don't take the same stance on these issues that their parents and grandparents do, and there needs to be some sort of middle ground. Until the GOP recognizes that their policies are actually hurting women, they're not going to be able to gain female voters, which means they are not going to be able to a clear shot at the White House.