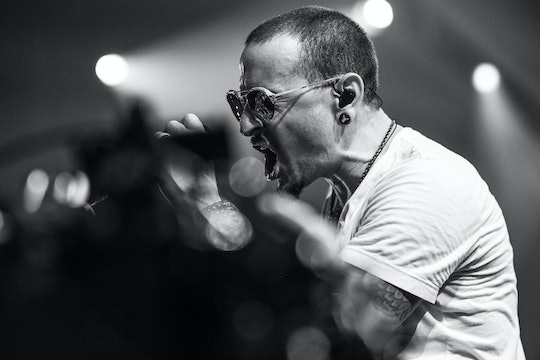 As one would expect, Linkin Park's open letter to Bennington is incredibly emotional. In the message, Linkin Park expressed the pain band members were in over losing Bennington and praised him for his "big heart." Although there were a lot of poignant moments in the letter, Linkin Park's decision to mention Bennington's ongoing struggle with his "demons" is important to anyone suffering from mental illness. Linkin Park wrote, according to Rolling Stone:

... We’re trying to remind ourselves that the demons who took you away from us were always part of the deal. After all, it was the way you sang about those demons that made everyone fall in love with you in the first place. You fearlessly put them on display, and in doing so, brought us together and taught us to be more human. You had the biggest heart, and managed to wear it on your sleeve.

By putting Bennington's mental health issues out there in the open, Linkin Park set the stage for necessary and potentially life-saving conversations to be had. In addition, Linkin Park made a point to note that Bennington's mental illness is part of who he was — and so it's part of what made him lovable. Reminding fans that people suffering from mental illness are valued and worthy of love is so crucial, especially when you consider all the stigmatization there is about mental illness.

As for Linkin Park's choice to highlight Bennington's "fearlessness," that too deserves attention. Although people with mental illness or those who commit suicide are often portrayed as weak, that couldn't be farther from the truth, a fact Bennington exemplified throughout his life. If you've followed Bennington's story, then you know he has always struggled with mental illness. In an effort to deal with his own issues and to bring support to his fans, Bennington was forthright about his suffering to the very end. There was an incredible amount of strength and bravery in Bennington's music, especially given all the trauma resulting from sexual abuse that he reportedly went through as a child. Speaking out on mental illness can be just as difficult as the disease itself, so Bennington is nothing short of a hero.

You can read Linkin Park's full letter, posted on the band's website, below:

Our hearts are broken. The shockwaves of grief and denial are still sweeping through our family as we come to grips with what has happened.

You touched so many lives, maybe even more than you realized. In the past few days, we’ve seen an outpouring of love and support, both public and private, from around the world. Talinda and the family appreciate it, and want the world to know that you were the best husband, son, and father; the family will never be whole without you.

Talking with you about the years ahead together, your excitement was infectious. Your absence leaves a void that can never be filled—a boisterous, funny, ambitious, creative, kind, generous voice in the room is missing. We’re trying to remind ourselves that the demons who took you away from us were always part of the deal. After all, it was the way you sang about those demons that made everyone fall in love with you in the first place. You fearlessly put them on display, and in doing so, brought us together and taught us to be more human. You had the biggest heart, and managed to wear it on your sleeve.

Our love for making and performing music is inextinguishable. While we don’t know what path our future may take, we know that each of our lives was made better by you. Thank you for that gift. We love you, and miss you so much.

Until we see you again, LP.

Below the letter is a link to a webpage dedicated entirely to Bennington, and it's filled with resources for those struggling with mental illness. Instead of treating Bennington like someone who did something "wrong," Linkin Park is celebrating everything he was — mental illness included — while also seeking to provide support for those who might feel like him.

Although it's difficult to process Bennington's death, there's a sense of comfort in knowing he did so much to destigmatize mental illness while he was alive. That being said, it goes without saying that Bennington was more than just a celebrity or a musician. For fans, Bennington was proof that it's OK to be human, and that many people are united by the common thread of pain.