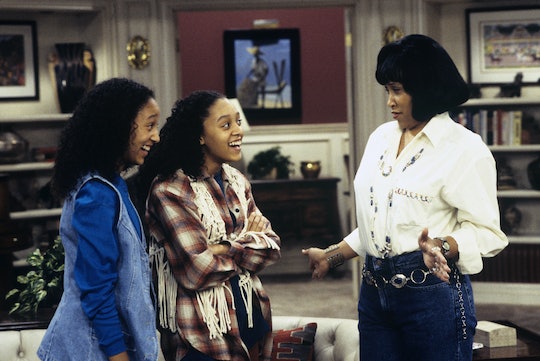 Lisa Landry On ‘Sister, Sister’ Taught Me About Black Girl Magic Before The Internet

My VHS collection of labeled Sister, Sister episodes includes (yes, I still own them) nearly half a dozen or so fully-maxed out tape recordings of the half-hour long series that followed the lives of two twins who reconnected in junior high school. I recall their mother, Lisa Landry (Jackée Harry) notoriously of Fashions by Lisa, as the hilariously doting single mother who’d approach tough topics — like thinking Tia and Tamera (Tia and Tamera Mowry) were smoking cigarettes and bailing them out on failed road trips — with humor and love. Upon re-watching a few of those episodes through the lens of a now-parent, however, I found that Lisa, like many of us, struggled with feelings of inadequacy, lack of a work-life balance, and constant pressure to live up to societal expectations.

Take, for example, in the Season 1 episode "The Birthday," when Ray Campbell (Tim Reid), Tamera’s father, surprised the twins with a road trip to Chicago in a limousine for their birthday and a nice overnight stay in a luxury hotel with room service. The surprise came on the heels of Lisa surprising the girls with handmade, custom-designed dresses which, by comparison, felt meaningless. The entire episode showcased Lisa taking comedic digs at Ray, until she ultimately accuses him of raising spoiled children because, as a previously single mother to the studious Tia, she focused her life on doing the best she could as an emerging designer with little expendable income.

In another episode, Lisa’s mother asks to visit the house she was now sharing with Ray, the co-parent who she talked up to her mother as her husband. Lisa felt pressured, as a grown woman, to live up to her mother’s idea of success — married and accomplished — which didn’t align with her reality: Co-parenting and entrepreneurial endeavors in a fashion business that hadn’t quite taken off yet.

Further reflecting on Lisa as a parent makes me think of my memories of my own mother, most of them fond and flawless, a single woman who’d made child rearing seem simple.

In comparing the perception I had of Lisa then to how I view her now, it’s interesting to note that through a child's eyes, the complex lives of our parents are watered down to credulous reflections of who they really may have been. I just remember Lisa as funny and cool, not struggling or inadequate. I also remember her being brave. When she took a job in Tia and Tamera’s high school cafeteria for example, and became the scapegoat for food poisoning, her daughters stuck up for her with a fearlessness like no other. It showed, to me then, the mark of a woman who had raised confident kids.

Further reflecting on Lisa as a parent makes me think of my memories of my own mother, most of them fond and flawless, a single woman who’d made child rearing seem simple. As a mother now myself, I know that it is anything but simple.

Lisa Landry is a quintessential cool mom. She makes cool clothes for her kids, she raised strong women, she persists in the face of adversity and she knows how to pick up an odd job to make ends meet, too prideful to accept handouts from the likes of wealthy Ray.

And the most important, underreported angle about Sister, Sister is the healthy co-parenting Lisa and Ray exuded in the 1990s. They fought and bickered, but ultimately co-existed, rearing children in the same household while maintaining professional and outside love lives, teaming up to tackle critical moments in the show — like when the twins wanted to meet their birth parents — and sending them off to college. For a young black girl, this nontraditional family dynamic was a healthy example of blended families — much like my then-family — and how strong relationships are fostered. Lisa Landry deserves all of the black girl magic love for her pivotal role in portraying a funny and familiarly flawed black mom in the 1990s.

More Like This
Viral TikTok Breaks Down How Beautifully Bluey Depicts One Character’s Infertility
Catherine Reitman Calls It Like She Sees It: “Being A Working Mother Is Impossible”
The Summer I Turned Pretty Is Officially Returning For Season 2
Yellowstone Season 5 Officially Has A Premiere Date