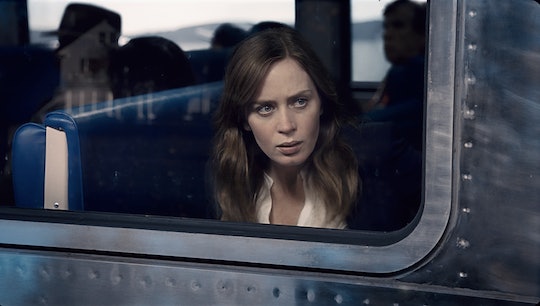 As long as you haven't been living under a rock these past few months, you've probably been exposed to The Girl On The Train's teaser, where a chilling version of Kanye West's "Heartless" serves as the trailer's slow heartbeat. The song starts off with a piano, similar to the introduction of his song "Runaway." Yet, instead of remaining a stagnant beat, his "Heartless" only gets more eerie, directly correlating with the progression of the trailer. So, now that I've got your ears all hot and bothered, the question remains: can you listen to "Heartless" cover in The Girl On The Train trailer?

It's no question that fans are itching to get their hands, or ears, on the song when the film premieres. And you can't help but wonder if the song is going to be on the album? It is certainly not uncommon that trailer songs make their way onto soundtracks, but what about this one?

The band, Blitz//Berlin, borrowed Kanye's "Heartless" vocal samples to complete the trailer. And it is undoubtedly Yeezy's auto-tuned voice we hear throughout. You can listen to Blitz//Berlin's "Surfboard Fire" on Spotify, iTunes, and Apple Music. The song is very similar to, but NOT completely the same as the beloved "Heartless"song heard in the trailer, lacking Kanye's presence.

The original "Heartless" track came out in 2008, and is from West's fourth studio album, 808s & Heartbreak. Yeezy's artistic decision to slow down the tempo of the song was definitely a smart one, leaving a dark mark on anyone who hears it.

Everyone and their mom knows Kanye is Beyoncé's biggest fan, so it is plausible that his inspiration for the trailer's theme came from Bey's trailer for Fifty Shades of Grey, where her hit song "Crazy In Love" is also slowed down in order to accurately set the tone for the film.

"Somewhere far along this road, he lost his soul to a woman so heartless" are just some of the lyrics teased in the trailer. Having these words accompany suggestive images instill wonder and curiosity within fans in this dark whodunnit thriller. Is the pronoun in the lyric a subtle indication that the killer is so obviously the man flashed in the film? The increasing suspense of the song in the trailer might suggest otherwise.

Like Gone Girl, the film is an adaptation from a best selling book, and it's non-diegetic song successfully haunts audiences, inspiring an inconclusive game of Clue in their minds long after the teaser concludes.

The song was scored by Canadian band Blitz//Berlin, whose song "Surfboard Fire" appears on the track list of the film's soundtrack. Unfortunately, "Heartless" isn't on the soundtrack. OK, technically it does have the "Heartless" sample in it — but why withhold the vocal version of it?

It's disappointing to say the least. I think we'd all gladly let Kanye orchestrate the soundtrack to our nightmares with a creepy, yet weirdly satisfying song such as "Heartless" any day. Hopefully the mixed version will be released as a single at a later time.

At least we still have the film to look forward to. Yes, Tate Taylor's The Girl On The Train has almost arrived! Coming to a station, I mean movie theater near you October 7. And if you want to keep track of the soundtrack — with or without "Heartless" — the release has been pushed from the movie's debut date to Oct. 21, 2016. It is available for pre-order now.