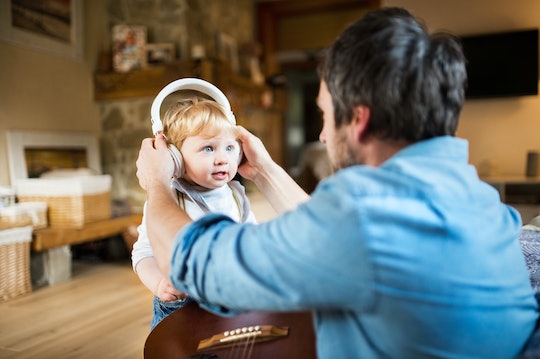 Listening To Music With Your Kid Has An Incredible Effect On Your Relationship, Study Says

It's pretty easy to connect with children when they're really young. They're cute and snuggly, and so naturally inclined to closeness that they rarely even let you go to the bathroom alone. But that often changes as they get older, and when they hit the teen years, their natural need for independence can make it difficult to stay tight-knit. A recent study out of the University of Arizona though has found that, actually, maintaining a bond with older kids could be as easy as sharing a Spotify playlist. Listening to music with your kids can improve your relationship when they're older, and though that might seem surprising at first, it actually makes a lot of sense.

University researchers studied a group of young people in their late teens and early 20s to see what their experience was with music growing up, and specifically the ways in which they shared those musical experiences with their parents. Did they listen to music together regularly as kids? Go to concerts together? Have Carpool Karaoke-esque singalongs in the car? Based on the participants' responses, researchers found that those who reported sharing musical moments with their parents more often had "better perceptions of parent-child relationship quality in young adulthood," according to Science Direct — and that the biggest impact came from the experiences shared during adolescence.

Shared family music time might seem like a bit of a strange concept (especially if your kids are older), but the reality is that it's actually quite a big part of many of our lives when we first become parents. We sing to our babies (both lullabies and silly made-up songs), watch musical shows (my twins and I were definitely The Wiggles superfans), and hit up kiddie music classes, singing songs and playing instruments in big, baby-filled circles. In toddlerhood and the preschool years, sharing music still comes naturally (hands up if you've memorized the words to "Let It Go" from Frozen, or "How Far I'll Go" from Moana), but shared musical experiences usually begin to taper off once kids get old enough to have their own preferences independent of their parents.

It turns out, though, that that seemingly inevitable process might not be such a good thing for the parent-child relationship. According to the study, sharing musical experiences encourages close feelings between people thanks to synchronization — doing the same thing together, and feeling closer because of it — as well as music's ability to encourage feelings of empathy among listeners.

The best part about the study's findings though? They aren't very hard to integrate into daily life. In September 2017, Chicago Tribune reporter Heidi Stevens wrote about the way sharing music became an important part of strengthening bonds among her newly-blended family, and though she may not have specifically been looking to implement the research into her life, it definitely seemed as though she was inadvertently able to replicate the study's results. She wrote,

On our own recent road trip, my husband and two of our kids took turns calling out songs for my daughter to track down on her phone and play for all the car to hear. (Never before have Stevie Wonder, Coldplay, Alvin and the Chipmunks and Ella Fitzgerald been played in such close succession.)

It passed the time and, I like to believe, nudged our already open hearts ever wider. Instead of being walled off in our own little worlds (looking at you, earbuds), we were sampling one another’s.

While the impact of listening to music with our kids might be most pronounced when they're older, there are still plenty of great reasons to begin when they're young. For one, it could set the foundation for a long-term love of music, and help maintain the parent-child bond far past the early years. But, according to KidsHealth.org, there are also plenty of ways in which music can specifically assist early child development.

For one, KidsHealth.org noted that music offers children "a rich sensory environment," that stimulate neural connections that can help with the acquisition of reading and math skills. Children's songs are also a great way to teach different concepts (singing the "ABCs," for example), and music can also be a great, soothing tool to help kids calm down or unwind, especially at bedtime, or during difficult transitions.

In other words? Listening to music might be something you do as an afterthought — while driving, let's say — but turning it into more of an active, shared activity with your kids can have a huge impact. Listening to children's songs on repeat might seem super annoying after a while, and honestly, your tween or teen's musical choices might not seem a whole lot better. But making an effort to encourage listening to music together can help create lasting bonds, in a way that's actually really easy and accessible for all parents to do.