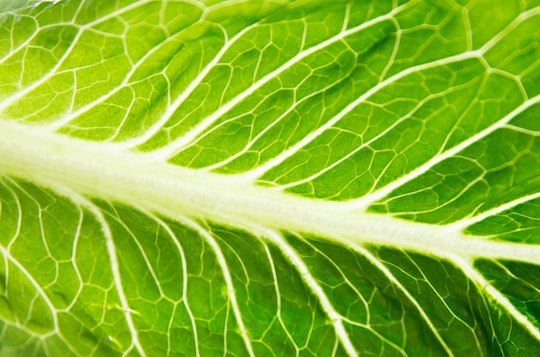 Listeria Can Hide In The Leaves Of This Lettuce

Over the last few years, reports of food-borne illness outbreaks attributable to listeria have been making headlines and concerning the general public. While taking the proper food safety precautions at home is important prevention, those preventative efforts need to begin at the broader agricultural level. New research shows that listeria can hide in the leaves of lettuce, meaning farmers are under even more pressure to develop sanitation measures that can keep produce safe for consumers.

Research led by Amanda Deering, clinical assistant professor in the Department of Food Science at Purdue University, revealed that the bacteria Listeria can live in the leaves of romaine lettuce, specifically, meaning it may circumvent standard sanitation procedures. According to Deering's research, listeria monocytogenes are able to live in the lettuce plants at every stage of growth, and may be able to sneak in via damaged plant tissue or roots. When the plants were exposed to listeria bacteria, it only took 30 minutes for them to become infected, according to the study.

Listeria can grow in a wide range of temperatures and tends to prefer neutral or slightly alkaline PH levels, according to Medscape. For scientists trying to understand how to prevent outbreaks of listeriosis — the potentially serious illness listeria bacteria causes — understanding what it needs in order to thrive is essential. Developing and refining techniques for food safety at the agricultural level helps prevent contamination, which therefore decreases the likelihood of outbreaks.

Food-borne pathogens like listeria often cause gastrointestinal illness: nausea, vomiting, diarrhea, a fever, and even "flu-like" muscle aches, according to the CDC. But listeriosis can be very dangerous for pregnant women and people with compromised immune systems (like infants, the elderly and people with HIV). Listeriosis can also have a delayed presentation of symptoms — sometimes up to two months after exposure — which means people may get sick and not connect it to something they ate.

According to the CDC, about 2,500 cases of listeriosis are reported annually, and 27 percent of those cases are in pregnant women. Of the pregnancy-related cases, as many as 22 percent miscarried, had a stillbirth, or experienced infant loss as a direct result of listeria. This is because listeria bacteria can be transmitted from the mother to the fetus through the placenta.

Outbreaks of listeria over the last few years have been linked to a wide variety of foods, many of which pregnant women are instructed to avoid: hot dogs, deli meat, and raw dairy products have been linked to outbreaks in the past. Though, so have salad mixes, frozen vegetables, raw sprouts, soft cheeses, ice cream, pre-packaged caramel apples, and cantaloupe, according to the CDC.

Cantaloupe, in fact, was linked to the worst listeriosis outbreak in U.S. history — at least since the CDC began tracking them. It was at the very least on par with another listeria outbreak in 1985 that killed 52 people, according to the CDC. In 2011, 143 people in 28 states were sickened from cantaloupe contaminated with listeria. The majority of those who got sick required hospitalization, and at least 33 people died. Seven cases were pregnancy-related: three newborns were diagnosed, and four pregnant women — one of whom suffered a miscarriage.

If listeriosis is confirmed, doctors often prescribed antibiotics and patients may require hospitalization, especially if they are pregnant or immunocompromised. The best defense against listeria is good food safety practices: while farmers and other food producers do their best, as the research at Purdue showed, there's always room for improvement. Consumers can protect themselves by making sure they cook raw food to a safe temperature to kill any bacteria that may be lingering, carefully wash food (like lettuce), and keep cooking spaces clean.