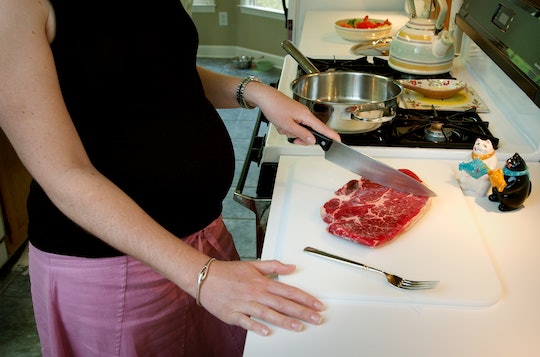 Doctors have been telling pregnant women to avoid unpasteurized dairy and deli meat for years. The reason? Pregnant women can contract listeria, which as been linked to miscarriage and preterm labor. In the past, this recommendation has come later in a pregnancy, but new research shows that listeria can have devastating effects in the early stages, too. In fact, listeria symptoms can feel like regular pregnancy discomfort — which means women may not realize their pregnancy is in danger.

In terms of what the CDC tracks, listeria doesn't infect many people each year: around 1,600. It's possible, of course, that more people get sick from the bacteria but don't seek medical attention, so those infections are never confirmed. What researchers do know is that pregnant women are 10 times more likely to get sick from listeria bacteria than the rest of us. Listeriosis, the illness caused by listeria, is usually acquired by eating something that was harboring the bacteria: unpasteurized milk, deli meat, and raw sprouts are common culprits.

While most cases of food poisoning are pretty obvious because they make you sick to your stomach, the symptoms of listeriosis can be vague. They also can feel an awful lot like just another day for a pregnant woman: fatigue, muscle aches, maybe a slight fever, and mild gastrointestinal symptoms.

Pregnant women who become infected with listeria bacteria may not feel very sick at all — but the danger the bacteria poses to the fetus they're carrying can be severe. That's why it's particularly troubling that the symptoms of listeriosis can be so vague and seemingly non-threatening.

Researchers at the University of Wisconsin-Madison School of Veterinary Medicine have been using rhesus macaque monkeys to study how pathogens affect fetal development. When they infected the moms with listeria, they noticed that the monkeys didn't show signs of illness, but abruptly had miscarriages. Researchers were able to determine that the listeria bacteria had crossed the placenta and the lining of the uterus — both of which usually protect the fetus from infections. They think that the immune response to listeria, which is a very fast-moving bacteria, overwhelms the system and actually weakens the placenta in the process, allowing listeria to pass through.

Previous studies have linked listeria to miscarriage in humans, but the mechanism wasn't well understood, and didn't factor in exposure very early in pregnancy. The research at the University of Wisconsin, even though it's in monkeys, definitely sheds some light on how listeria could cause miscarriages — but also reinforces the fact that the damage may be "silent" if the mother doesn't feel sick and therefore doesn't know she's been infected.

If identified, listeria is treatable with antibiotics. The problem is, by the time the damage from the bacteria has been done, it may be too late. That's why it's important for pregnant women to be conscious of their dietary choices, commit to good food safety practices, and remain aware of the foods in which listeria might be lurking and avoid them, at least until after their baby is born.