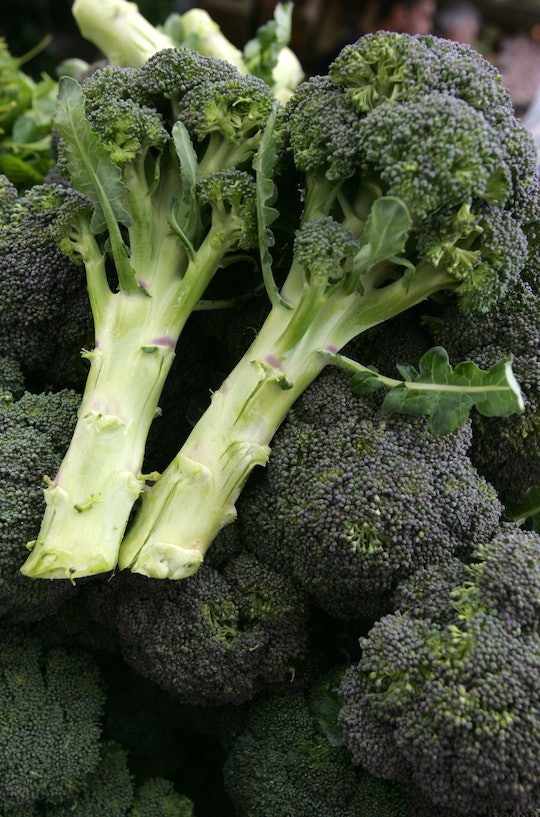 Listeria Symptoms Every Mom Needs To Know, Because These Veggie Recalls Are Out Of Control

Fresh off the heels of a massive frozen vegetable recall caused by supplier CRF Frozen Foods, Trader Joe's has issued another recall, this time on fresh vegetables – specifically, their Broccoli Slaw & Kale Salad. And Trader Joe's is far from the only company affected by the recent onslaught of veggie recalls due to possible listeria contamination; major chains such as Costco and Kroger have had to pull products, and all told, the recall has effected more than 40 brands. Avoiding contaminated food is priority No. 1, of course, but every mom should know the symptoms of listeria infection, because it could be deadly.

That's right, deadly. According to NPR, while most healthy people can handle listeria, if it gets into the bloodstream, it causes listeriosis, which kills one in five victims. Pregnant women, newborns, and the elderly are of particularly high risk. Those wondering why listeria sounds familiar might recall that it's the reason pregnant women aren't allowed to eat deli meat or unpasteurized cheese; the bacteria can live on cold food, hence the reason it's causing us to throw all of our frozen food in the trash. Pregnant women are 10 times more likely to be sickened by listeria than the general public, and that can put the fetus at risk.

According to the Centers for Disease Control and Prevention, listeriosis symptoms include "headache, stiff neck, confusion, loss of balance, and convulsions in addition to fever and muscle aches." However, the infection presents differently in pregnant women, who usually experience "fever and other non-specific symptoms, such as fatigue and aches." Listeria infection during pregnancy can lead to "miscarriage, stillbirth, premature delivery, or life-threatening infection of the newborn."

The CDC cautions that listeria occurs naturally in the environment, and all people are regularly exposed to it, so there's no need for asymptomatic people to get tested, but those experiencing fever and muscle aches or stiff neck, or fever and chills while pregnant, should immediately see their doctor to test their blood, spinal fluid, or amniotic fluid for the presence of Listeria monocytogenes. Symptoms can take up to two months to show up after eating contaminated food, so patients shouldn't assume they're out of the woods just because they didn't have kale for dinner the night before.

Listeria can be killed with proper cooking, NPR reported, but it's certainly not worth the risk to knowingly eat potentially contaminated food (a full list of FDA recalls can be found here). That being said, those who want to go the extra mile to stay safe can heat their non-recalled veggies to 165 degrees Fahrenheit to be doubly sure that their food is listeria-free. Keep in mind, though, that infection isn't necessarily a death sentence; most cases are successfully treated with antibiotics. In short, we still have no excuse for not eating our vegetables.