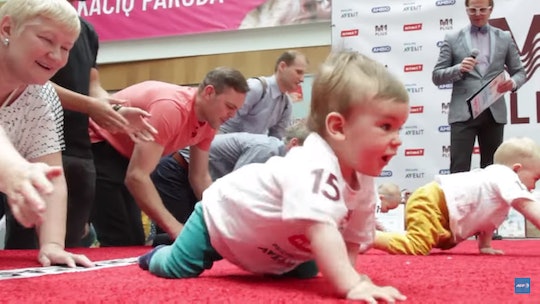 The universe often likes to throw us a few curve balls in the middle of the craziest weeks it seems, but it also (sometimes) makes up for it with videos of adorable babies. This time, it’s all about Lithuania’s baby races and the corresponding video footage is easily the best and most adorable thing you’ll see all week. That's right: Earlier this month, a group of 25 tiny tots wearing numbered jerseys came together for International Children's Day and scooted across the floor in pursuit of one goal: claiming the title of Lithuania’s fastest baby of the year.

At the annual race — held in the Lithuanian capital of Vilnius on June 1 — parents and grandparents set their babies off on the 5-meter-long red racetrack and lured them to the finish line by shaking colorful plush toys and milk bottles, jangling sets of keys, flashing iPhones and TV remotes, and even waving pink balloons at them.

Some little ones were clearly in it to win it, while other tots weren’t as competitive or perhaps a little distracted by all the excitement. Heck, some just plopped themselves down right in the middle of track and called it a day.

But one baby in particular had his mind on the prize and this year that went to a speedy 10-month-old named Kamilis Dambrauskas, who made it to the finish line and into his mom’s arms in just 11 seconds, as Reuters reported.

Watch little Kamilis' victory — and so much silly sweetness — below:

This little guy's win might not have happened if it weren’t for several training sessions at home and the full support of his parents.

"We trained a lot at home. We looked for what he reacts to best, and decided to use jangling keys to lure him", Irena Dambrauskas, Kamilis' mom, told Reuters of the big win. "This is important, and you can only participate once in your life," his dad, Vytautas Dambrauskas added.

This year's competition in the Eastern European nation marked the 18th annual race to find the country's fastest crawler — quite possibly one of the cutest traditions a country could have. But the race isn't the only adorable custom for kids in Lithuania: On Shrove Tuesday, a Catholic feast day 40 days before Easter, kids participate in what can be considered the Lithuanian equivalent of trick or treating. But instead of asking for candy and saying "trick or treat," they'll sing a song and ask for pancakes and coffee, according to EveryCulture.com. Talk about a sweet deal.

Between these two traditions, it's clear Lithuania is not lacking in the cuteness department. Kudos.

More Like This
Does The FDA's Plan To Limit Lead In Baby Food Go Far Enough?
Adam Levine & Behati Prinsloo Welcome Their Third Baby & This Is Where It Gets Real
Keke Palmer Casually Drops Her Baby's Sex On Jimmy Fallon
Mom Gives Birth To Record-Breaking 16-Pound Baby
What Parents Are Talking About — Delivered Straight To Your Inbox