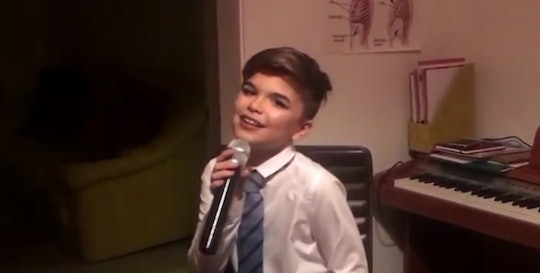 This Little Boy Bullied For Wearing Make-Up Is Inspiring

Listen up records labels: The next star — and all-around role model — to watch out for is absolutely going to be this little boy who was bullied for wearing make-up, but who has the voice of an angel. Earlier this week, 12-year-old Reuben de Maid gave a mind-blowing performance on The Ellen DeGeneres Show with his stellar rendition of the Dreamgirls fan-favorite and 1982 Jennifer Holliday classic, “And I’m Telling You I’m Not Going.” But the Welsh native’s voice and presence on stage aren’t the only reasons you’re going want to see him starring on Broadway and plastered on magazine covers. What’s really going to give you goosebumps is how stood up to his bullies in the most inspiring way.

After his performance, the soon-to-be star on Little Big Shots — a variety show performed by kids on NBC hosted by Steve Harvey — opened up to the daytime host about how he was teased by his classmates for wearing make-up (which he does incredibly well, by the way). “In my drama group, I used to get hit, punched and kicked,” de Maid told DeGeneres, explaining that the bullying continued for about two months. “I tried to brush it off, but brushing it off just doesn’t work. So I stood up to them.”

The self-taught make-up artist went on to explain that his mother, who he has shared his skills with, eventually transferred him to another school where he felt comfortable being himself.

“Well, good for you for not stopping being who you are. I mean, that’s really tough,” DeGeneres said. “The fact that just because you want to wear make-up that somebody thinks that they have to hit you or even call you names, it’s not hurting anybody and it’s what you want to do. And you look fantastic.”

Even though de Maid has been blessed with vocal chords that could some of the best in the business out of a job, the talented singer doesn't necessarily want to pursue a career in that industry after his time on Little Big Shots. Instead, he quipped that he'd like to run a business empire like reality TV's most famous family: The Kardashians.

"I'd loved to be, like, a Kardashian," de Maid said with laughter. "I’d love to obviously be onstage, but I also want to have my own make-up brand, like have all of my ideas into a bottle." And his plans don't stop there, he also wants to put together a website and YouTube channel where he can publish tutorial videos. And in true DeGeneres fashion, she ended the segment with the perfect gift to get him started: a vanity table, lighting, make-up, and a laptop to start his YouTube career.

If this performance and the ones he posts on his new YouTube channel are any inclination of what's coming next, then his spot on Little Big Shots, which airs this Sunday night, is absolutely going to make him a star — for more reasons than one.