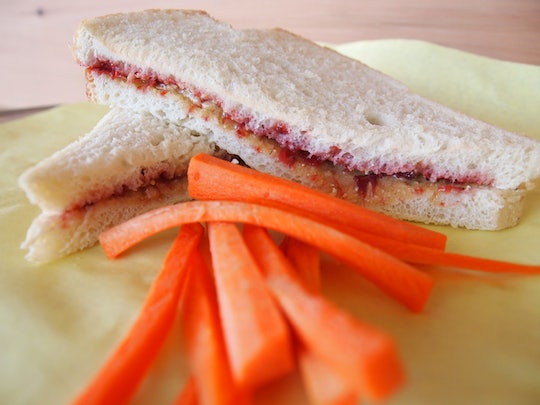 If I'm being honest, I'd love to eat a giant waffle cone with three scoops of mint chocolate chip ice cream for lunch every day. I don't (usually), because I know how important it is to eat veggies instead of as many treats as my heart desires. The beauty of toddlers, on the other hand, is that nutrition means nothing to them, and so they're truer to themselves than we boring adults are. Case in point: this little boy who packed himself lunch to the most predictably hilarious results possible. And, really, no one even needed to see the photo the 3-year-old's dad posted to Reddit soon after to know that the meal certainly didn't contain any hummus or hard boiled eggs.

It all started when Andy Rine was hanging out at home with his son, Adam. Rine momentarily left Adam alone in front of the TV while he went to get the boy's younger sister out of her crib, he told Babble afterwards. What he came back to was a sight he couldn't help but capture and share with the internet: Adam's lunch box, open on the couch, and overflowing with his favorite snack, cheese balls.

"Look, I put my lunch in my lunchbox!" the 3-year-old told his dad, according to Babble. Because of course.

Rine had no choice but to clean up the mess and move on after taking the photo that he'd later caption on Reddit simply, "My 3 year old packed his own lunch today."

Obviously, it's probably not a meal that Adam is actually going to get to take to preschool (although it would make all the other kids jealous). But the kid is onto something in attempting to pack his own lunch — even if his goal was simply to take as much of his favorite snack as possible on the go. Co-founder of the nutrition-based education company Nourish Schools Casey Seidenberg wrote that having her 5-year-old daughter actually pack her own lunch each day helps her learn independence, organization, and responsibility. In a Washington Post column, though, Seidenberg recommended that parents help kids create a menu and pack the lunches with their kids for a week before handing over the reigns completely.

Maybe in a couple of years Rine and Adam can start their own version of a lunchbox assembly line to pack fun, nutritious meals together — and maybe they can even include cheese balls on occasion, as well.