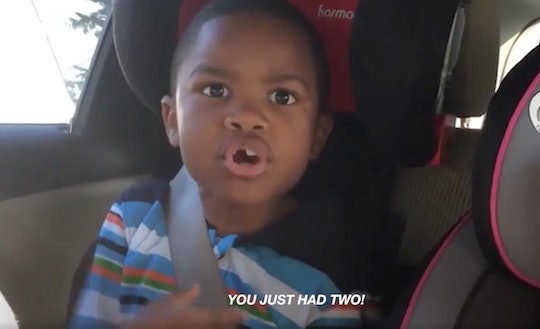 The world is seemingly in disarray. President Donald Trump can't remember which country he bombed just last week, Gilmore Girls is probably done forever, and global warming seems to be making its presence more and more obvious as temperatures reach sweltering highs in many places. But, not all is amiss. Why? Well, because the internet still exists, and while it can definitely be a source of anxiety with the current news cycle, there are also times when it brings the world exactly what it needs. Like this little boy's response to his mom's pregnancy announcement, which will undoubtedly leave you cry-laughing.

In the video, which has since gone viral, a little boy named Tray has a few questions for his mom when she tells him that she's pregnant. Sitting in the back seat, nice and cozy in his car seat, Tray doesn't exactly look like someone who would have such a large vocabulary, or such an exhaustive list of inquiries, but that doesn't mean he isn't ready to ask all the important questions. In the video, Tray begins his take-down with the classic, "What were you thinking?" And, of course, it only gets cuter from there.

Watch below, and go ahead and excuse yourself for a few minutes, because you're definitely going to laugh for a while after you see Tray telling it like it is.

After the initial shock of the announcement starts to wear off, Tray is left to comment on the emotional stress his mom's announcement has inflicted. "This is exasperating," he exclaims. He then makes it a point to remind his mother that she already has two kids, and why would she "just replace one of [her] babies?"

Obviously, Tray is a little confused as to how pregnancy, childbirth, and parenthood works if he thinks that his mom having another baby means he'll be getting the boot, but his response is still ridiculously adorable. And even better than his initial shock is when the realization that he's going to have another sibling finally starts to set in, and Tray starts making some concessions.

"You better get me some ear buds," he tells his mom, referring to his little sister's crying soon being joined by another baby's loud cries.

Tray's initial response is hilarious, and the pregnancy might not make sense to him right now, but he's clearly a great big brother to his little sister already. It's safe to assume he'll be an equally excellent big brother to his new sibling as well.