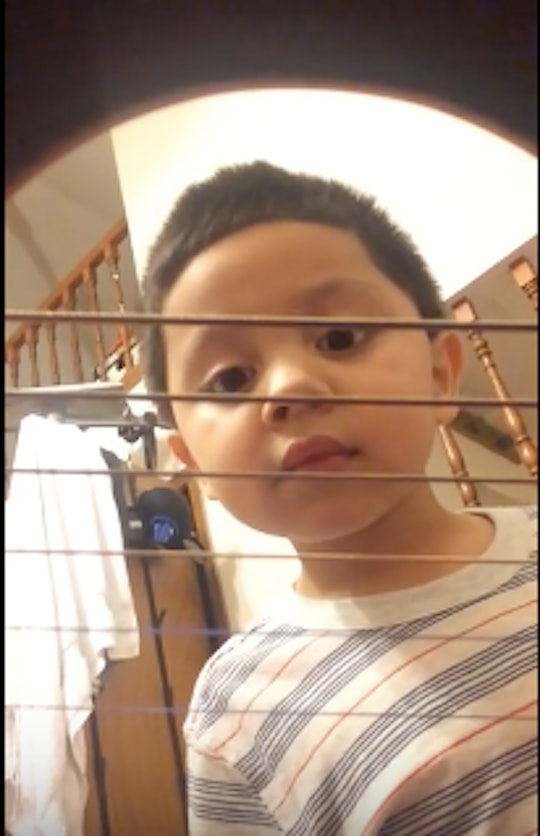 Siblings, while sources of constant love and support, are also a source of consistent interruption. No one knows this better than Jessica Montoya, who was trying to film a YouTube video when her younger brother intervened. Jessica's little brother disrupted his sister's guitar video, reaching into the guitar to grab her phone before giving her some sound advice.

Jessica had put her iPhone inside of her guitar to give YouTube viewers an insider's view of her strumming her pain with her fingers. Suddenly, her younger brother Jacob shows up, noticing that there is a device inside of her guitar and quickly investigating. After asking what's inside, he reaches in and pulls out Jessica's phone. He then hands it to her, oh-so-lovingly, and defiantly says, "Next time, be careful with your phone." Legend.

Jessica wrote a caption on her video, "Jacob is a little bit too caring," which is clearly true, but it's also true that her little brother is adorable. Jessica took it in stride, telling Jacob "thank you" after he "saved" her phone from possible harm. The entire exchange is heartwarming and sweet, and proof that siblings look out for one another, care about one another, and can't let the other live without making sure they're doing it right.

Jacob isn't the only one who has interrupted his sibling during an attempt to make a YouTube video. Here are seven other kids who wouldn't just let their brother or sister enjoy the spotlight solo.

More Like This
We Need To Talk To Our Kids About Brittney Griner — Here's How
Neil Patrick Harris & David Burtka Hate Children's Menus — And With Good Reason
Health Officials Are Offering About 1 Million Children In London A Polio Booster
If Serena Williams Can’t Have It All, Who Can?