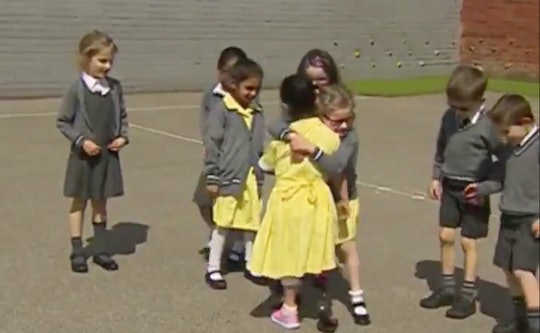 Little Girl's Friends Are Obsessed With Her Prosthetic Leg

So, here's the best of what the internet has to offer: A short video of a schoolgirl running and playing with her friends on the playground for the very first time. The girl is 7-year-old Anu, and in the video, her friends were ecstatic after the little girl got a prosthetic leg that now allows her to fully participate in recess with them — finally. That's because, although Anu has been wearing a prosthetic for most of her life, the sports blade makes it possible for her to engage more fully in a broad range of activities that are nearly universal staples of childhood.

BBC Midlands Today posted the clip to social media this week, and it's going to tug on all your heartstrings. In it, Anu marches toward her friends on the court in Birmingham, England, and they eagerly gather around. "Is that your new pink leg?" one friend asks, clearly impressed. A couple of the girls — they're all wearing adorable yellow dresses — hug her. And then they're off. They chase one another playfully, as kids do. Soon, Anu and another friend are walking in a kind of lockstep, hand in hand. They're all smiles.

Simply put, it could not be cuter.

"Anu is seven and goes to school in Birmingham," BBC Midlands captioned the tweet. "Look what happened when she showed her friends her new sports blade. It's just gorgeous!"

Because an umbilical cord wrapped tightly around Anu's right leg at birth cut off blood circulation, it had to be removed shortly afterward, according to NPR. The BBC followed Anu over the course of its reporting on a British program through the National Health Service to help children who need extremely expensive sports prosthetics that would otherwise be extremely expensive in order to be active. "It makes me run faster and do my street dancing faster," Anu told the BBC Midlands in a video that also shows her playing soccer in with her dad in their backyard.

Although the National Health Service got $2 million to fund prosthetics for kids like Anu, it's possible that this money won't be replenished, NPR reported. And because growing children require a "change of socket" every year, according to the Comprehensive Prosthetics and Orthotics group, that's a serious concern for families with kids in situations similar to Anu's — and for Anu's family itself.

For now, though, let's just bask in the pure, delightful joy of children — and try to learn a thing or two from them, too.