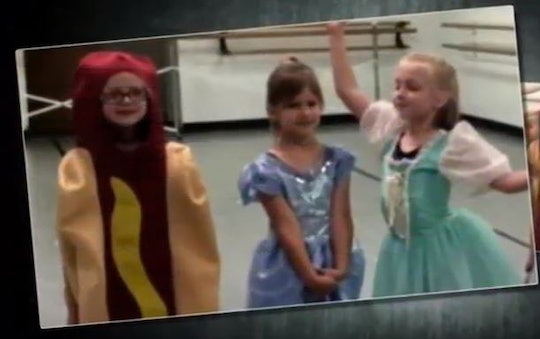 The world is full of frilly, bejeweled, pastel tulle covered princesses. And that's cool. But I have to give a hearty salute to 5-year-old Ainsley, the little girl who wore a hot dog costume on princess day at her dance class and won over the internet's collective cold, black heart. Because in a world full of Elsas, Jasmines, and Belles, it's so great to see a Hot Dog Princess willing to stand out from the crowd.

The original images of Ainsley dressed as a hot dog started to circulate online in May, according to TODAY. And, ever since, people all over the world have fallen in love with their newly-minted monarch of mustard, #HotDogPrincess.

Sarah Nativi, Ainsley's teacher explained to BuzzFeed that, "She loves princesses, but she wanted to be original and wear a hot dog costume instead," she said. "She wore a princess costume underneath it and said she was a princess on the inside!"

Fantastic. Little Ainsley, the Hot Dog Princess, has become a sensation. She even wore her hot dog costume to her spring dance recital and posed with her fans. And she has a whole lot of those.

But it begs the question: What is it about a little girl who dared to be a hot dog in a room full of princesses that makes us all want to stand up and cheer? Courage and self confidence for sure. But there's also a rising tide of women and mothers who are sick to death of trying to squeeze their kids into some arbitrary box — or costume — rather than letting them be who they are. I also think that even though our girls like princess dress up, crowns, and playing with babies, it's hard not to wonder if this is something we're imposing on them, and as a result limiting how they're able to imagine themselves in the world.

I also happen to be the mother of a 5-year-old little girl who is going to grow up in a world that needs women to be engineers, scientists, earners, explorers, CEOs, and presidents. Many parents are now raising girls whose lives will look literally nothing like a Disney princess tale — who are going to need the skills to make their own way in the world and save themselves from danger, even while they're being told they're not strong enough or smart enough to be the hero of their own story. And in our intrepid little Hot Dog Princess, we've found a mascot for getting rid of the old-school limitations society tries to place on girls — that to be pretty, agreeable, and sweet are the most important things they can be.

Be the hot dog instead.

Of course Ainsley wouldn't have risen to rule over the internet as its Hot Dog Princess without plenty of help from her parents, teachers, and friends, who clearly want her to be her own person. Here's Ainsley's Dad's reaction to his little one going viral.

And that's the real lesson here for us. Let's all join forces and encourage all of our kids to be the hot dog in a room full of princesses and give them the courage, and permission, to be exactly who they are.

High fives all around.