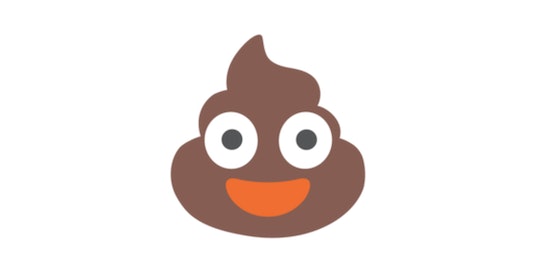 This Little Girl's Poop-Themed Birthday Is *Everything*

If you've ever been around a small human being, you've probably noticed that the simplest things can amuse them and those things are usually the things that grownups tend to not talk about in polite company. You know the things: butts, farts, and of course, poop. If you're not convinced, just take a gander at this one amazing little girl's poop-themed birthday party. Some girls ask for a princess themed birthday party or a theme that matches their favorite super hero movie. Not 3-year-old Audrey, oh no. Little Audrey wanted poop. A lot of it. And she got exactly what she asked for.

Her mom, Rebecca, went All. The. Way. with the poop theme. There were poop emoji balloons and stickers, and cookies that looked like steaming piles of poop. The cake had poop on it (icing obviously) and Rebecca herself wore a poop emoji costume. Guests played "pin the poop," where they blindly tried to pin the poop as closely as possible to dead center in the middle of a printed toilet bowl poster. There were whoopie cushion take-home gifts and a poop piñata filled with Tootsie Rolls. If Audrey isn't your hero by now, there's something wrong with you.

This was quite possible the best idea ever. Even better? The smile on Audrey's face as she was surrounded by poop. From the looks of it, she was flipping out.

Rebecca told The Huffington Post that she was a little worried at first, but Audrey had a way of talking her into making poop the theme. And by which I mean insisting on poop, and poop only. "I tried suggesting other themes, but she always insisted on poop," the mom said. She said that she was a little nervous about the grandparents' and guests response to the theme, but it all worked out in the end. Because the party wasn't for them anyway. Rebecca said:

I feel like in this time of Facebook and Pinterest, we sometimes get caught up in trying to impress other adults. This party wasn’t for me, it was for Audrey. I love that we will look back at pictures, and it will represent her at 3 — my funny and quirky little girl.

Sure, the poop may be too weird for some people. But it came with a lot of love. Rebecca told The Huffington Post that the whole party reflected Audrey's personality. "Audrey is definitely her own person. I hope she always has the confidence she has now. She is so funny and the best big sister," she said.

While the poop may have been funny, Audrey is definitely a badass for asking for what she wanted, even if other people thought she was out of her mind. What's the big deal about poop anyway? Clearly this little girl knows how to make it work.