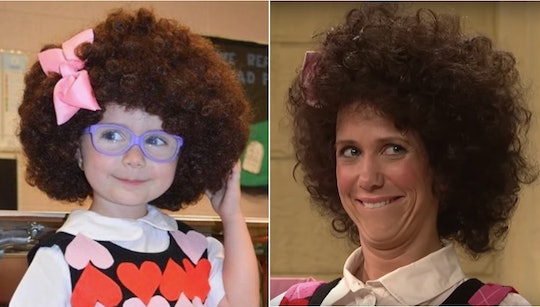 When it comes to Halloween costumes, it's always a mad dash to figure out something creative, cute, and well, culturally relevant when you can. And while some costumes are just timeless for children in general (who doesn't look adorable as a tiny pumpkin or baby strawberry?) the truth is that sometimes, when we dress up our kids, it's more for our own laughs than anything else. And this little girl's SNL "Gilly" Halloween costume, made by her mom, is a perfect example of that. Really, it's so spot on, you might have to do a double-take and it marks the creative mom's ongoing track record of having the best costumes around.

For those unfamiliar, Gilly is a Saturday Night Live character played by Kristin Wiig. She's quirky, wears big classes, and large, curly hair. You might recall her from some skits such as the "Science Fair" with Zac Efron, during which Gilly wreaks havoc on her school's fair. In fact, it was this sketch that inspired the costume itself, which was recreated precisely, down to the pattern on her dress.

Of course, Wiig's character is, essentially, a grownup little girl, so it's even more adorable to see an actual little girl dressed in her heart-embroidered dress and big glasses. At least, that's what Britney Jones, Everly's mother, tells Romper.

"I started planning her picture earlier this year," she says. "I had the wig from me dressing as Gilly a few years back and thought she would make the cutest little Gilly. I’m a huge SNL fan and absolutely love Kristen Wiig."

Jones went on to say that the "Gilly" skit is a favorite in their family, and Everly and her other son love it, too.

"She has watched the skit and laughs out loud at it. Listening to her little giggle at something I love is the best. The first time she watched it she chuckled and said, 'She said what and sorry!'" Jones tells Romper. "Everyone loved it! They couldn’t get over how good it turned out. Everyone commented about how great her facial expression is. The best thing about it is, that was all her."

Jones says that she tried to get her daughter to move her teeth over her bottom lip to get that iconic "Gilly" expression, and while she was snapping photos, Everly just started posing on her own. "I greatly enjoy doing this every year. This is year four of dressing my son and Everly’s first year. I already can’t wait to plan next years picture! It’s seriously one of my favorite things to do every October," she says.

It's actually not the first time that Jones' costumes have made headlines. In fact, last year, her son Jude dressed up as another SNL character, Bill Hader's Stefon from "Weekend Update." (It was so spot-on that even Chrissy Teigen liked the post, to which Jones previously told Romper she "freaked out" about.)

So if you're running short on ideas for your kids costumes and are looking for something homemade or accomplishable with a wig or two, you might want to take a cue from the Jones family, because their Halloween getups might be just as iconic as the skits themselves.