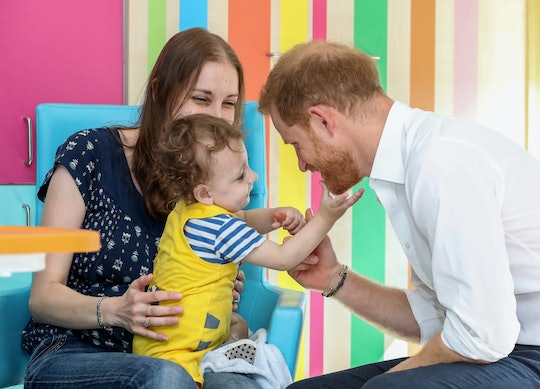 There are a lot of cute things in the world: puppies, clumsy baby elephants, frolicking kid goats, toothless baby smiles. In fact, you might say that the list of totally charming things to exist in the world is a long one. Still, little kids fascinated by Prince Harry's beard may be the most adorable phenomenon to ever exist.

Most recently, it was a child at Sheffield Children's Hospital in South Yorkshire who appeared to be fascinated with Prince Harry's glorious ginger beard. According to The Evening Standard, the Duke of Sussex appeared more than happy to let 1-year-old Noah Nicholson feel both the hair on his face and the hair on his head while visiting the hospital on Thursday. As Prince Harry talked with Nicholson's mother, the child repeatedly attempted to grab at the royal's beard.

Of course, this isn't the first time a child has appeared to be curious about Prince Harry's beard. In July 2018, photographers in Ireland caught Prince Harry allowing a young boy to give his beard a tug while touring Croke Park in Dublin with Meghan Markle. According to The Irish Sun, the then-newlywed couple watched children play Gaelic football and hurling during the tour as part of the first official overseas trip they conducted as a married couple.

Prince Harry's beard received another good-natured tugging a few months later while he and Markle met with local school children in Dubbo, Australia. In video shared by TODAY Show Australia, a little boy can be seen going right for Prince Harry's beard after greeting him with a hug. With a laugh, the Duke of Sussex allows the child to stroke his face multiple times. When Markle appears a few moments later, the child still appears to be besotted with Prince Harry. Although the boy can be seen giving the Duchess of Sussex a warm hug, he keeps his eyes on Prince Harry the whole time and makes a beeline straight for the royal's beard once the embrace is over. He even gives Prince Harry's head a rub for good measure.

In comments to The Daily Mail, the boy's school principal said the youngster, whose name is Luke, had been "mesmerized" by Prince Harry's beard. "Luke's favorite person in the world is Santa Claus, who has a beard. So he rubbed Harry's beard," the newspaper reported the principal said, adding the cheeky child didn't give Prince Harry any say in the matter.

While Prince Harry's beard has garnered a lot of attention over the years, it's impossible to pinpoint exactly when kids first became fascinated by its fiery red glory. For adults, at least, the obsession has been ongoing since the beard was first spotted during the young royal's month-long trek through Antarctica in late 2013.

"We don't know how any of the other participants are able to concentrate on trudging through the snow or whatever in the presence of this emerging ginger marvel," Vanity Fair's Josh Duboff wrote at the time of the beard's surprise debut.

While Prince Harry's beard was quick to capture a number of fans early on, there was reportedly one important critic: The queen. According to Hello!, The queen reportedly made her grandson shave off his beloved-beard shortly after his return from Antarctica. Always the royal rebel, Prince Harry regrew his beard in the fall of 2015 much to the delight of adults and children everywhere. Perhaps Prince Harry considers all of his public beard tugging to be good practice for life at home with his own son, two-month-old Archie Harrison Mountbatten-Windsor.