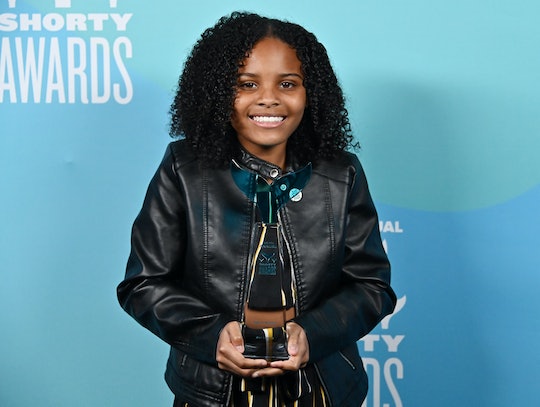 While the state of current environmental crises is severe and distressing to think about, it's pretty inspiring to see so many kids standing up to demand change and action. You may be familiar with Greta Thunberg, the 16-year-old climate change activist who's making headlines for her impassioned speeches and incredible advocacy, there's another young trailblazer whose work also deserves celebrating. Get to know Mari Copeny, aka Little Miss Flint, with a few fun facts about her advocacy that will surely inspire you.

Copeny, an 11-year-old from Flint, Michigan, has already built a following in the tens of thousands for her unapologetic demands that the town receive clean water. Since 2014, after a pipeline was built near their water systems, the water in Flint has had "dangerous" and life-threatening levels of lead in it, according to CNN. To this day, many citizens of Flint still do not have clean drinking water — a basic human right — which is why Copeny has taken to a grassroots movement to organize and incentivize change in her community.

Here are a few facts about her, and her mission, that will shed light on how important, and badass, her work really is.

She's Being Compared To Greta Thunberg

Thunburg has been making international headlines for her advocacy work relating to climate change. And both girls have gotten the attention of sitting presidents, though Thunberg was unfortunately mocked by President Donald Trump whereas Obama took Copeny seriously.

On social media, some are comparing the two to one another, pointing out that Copeny deserves as much attention as Thunburg has been receiving. "I hope the same energy given to Greta Thunberg is the same energy you give to Little Miss Flint because Flint still without clean water," one person wrote on Twitter.

In 2016, Copeny penned a letter to President Barack Obama, which inspired him to respond with a visit to Flint. Shortly afterwards, Obama signed off on a $100 million repair plan for Flint's water system, according to CNN. Though it helped, as of 2019, the water has still not been completely tested for safety, which is why Copeny is still advocating for further help.

Though the water crisis is not quite over, Copeny's work extends far beyond advocating for political intervention. In fact, in an op-ed with ELLE, Copeny opened up about the various ways she has been able to give back to her community during the fight, including giving out over a million water bottles, raising over $250,000 for relief efforts, and with her "Flint Kids Read" campaign, and gave thousands of books and 17,000 "fully stuffed" backpacks for kids to return to school.

She Doesn't Let Age Hold Her Back

For Copeny, age is just a number.

"You're never to young or to small to change the world," Copeny told Mashable in an interview. "If they don’t want to listen to you at first, keep on talking, they will eventually have to hear you out. And once they hear you out, they will see that you have a unique view of the world and that your opinion matters."

She Has Advice For Aspiring Activists

In an interview with Bright Lite magazine, Copeny shared her advice for other kids who want to do advocacy work, but might not have the resources. "You don’t have to have a huge following or a ton of money to help in your community," she explained. "You can start small, you can help an elderly neighbor take out their trash or read to the smaller kids in your neighborhood."

Though she's remarkably accomplished, it's clear that Copeny is just at the beginning of her incredibly career as an advocate. It's exciting to see young people feeling motivated and inspiring others to not allow age, policy or any other barriers stand in the way of justice.