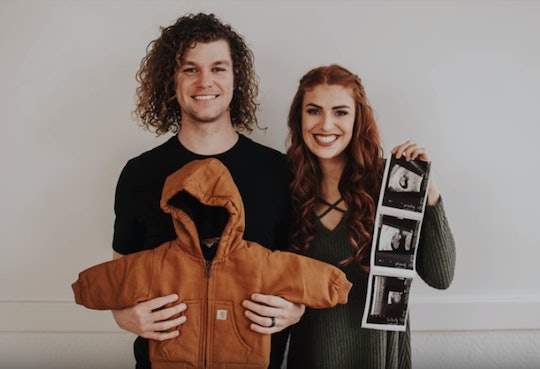 'Little People, Big World' Star Audrey Roloff Shamed For This Photo She Shared Of Her Baby

As a new parent, you want to share every and any photo of your baby possible. After all, you've made this amazing, tiny human, and you love everything about them. Why wouldn't you want to show the whole world? At time, though, you may face criticism over what you chose to share — sometimes valid, sometimes overblown. In the following case, it seems it's the latter: Little People, Big World star Audrey Roloff shared a photo of her daughter, and now she's being shamed for what could be considered pretty ridiculous reason.

Last week, Roloff posted to her Instagram account a photo of baby Ember Jean with dad Jeremy, who is holding their daughter on his shoulder. In the snap, Jeremy is smiling and looking Ember, who is wearing a white bow headband, diaper, and the cutest pair of red cowboy boots. Audrey captioned her Instgram post: "If this photo doesn't make your day[,] I don't know what will 💕#emberjean."

The sweet photo has melted the hearts of many fans. But others have taken to Audrey's Instagram post to criticize the new parents for not putting Ember in a shirt, according to The Hollywood Gossip. Some even expressed the concern about pedophiles who may troll social media accounts.

One Instagram user commented on Audrey's post, The Hollywood Gossip reported, "Cute photo, but I would have never put my daughter’s pictures on social media without a top. Too many weirdos now a days. You gotta be afraid." While another wrote, "You would think her mother would have put a cute top on her." (To that end, someone replied that Ember "might be cold while dad is wearing a long shirt and long trousers!")

Other users even went so far as to weight-shame Ember, commenting on the barre instructor's Instagram post that her 10-month-old daughter is "chunky."

But fans of Little People, Big World quickly rushed to the Roloffs' defense, calling the photo "adorable" and labeling Ember's red boots as "so cute," according to U.S. Weekly. One person wrote, enthusiastically, "My daughter needs those boots!"

People can be so rude!! Ember is not chunky, she is a normal heathy baby. She is just right. My daughter would get upset when people would her baby was chubby, chunky, rolly Polly, he was a nice healthy little boy. He doesn’t eat junk, or drink sugary drinks, he is just a good eater. So don’t let people bug you, Jeremy has beautiful curls.

Roloff isn't the only star to be shamed by the parenting police, recently. Last week, Singer Jessica Simpson was heavily criticized for allowing her son Ace to flip in a pool after he broke his arm, according to People. And over the week, fellow reality TV star Jessie James Decker was admonished for her 4-year-old daughter Vivianne Rose's tan, which the mom of three showed off in an Instagram post, according to Yahoo! Lifestyle.

Parent-shaming, at its core, is ridiculous. Every person parents differently, but that doesn't necessarily mean they are doing a bad job. More people need to trust that parents know what they're doing, and that they're doing right by their children, even if you may not agree. So long as it's not obviously harmful and dangerous.

But what's mostly confusing about the criticism lobbed at the Roloffs is the fact that babies photographed or filmed shirtless is a common thing. Just watch any one of these baby television commercials. Should these commercials be banned? Should the parents of these children be shamed? Where is the line drawn in the sand?