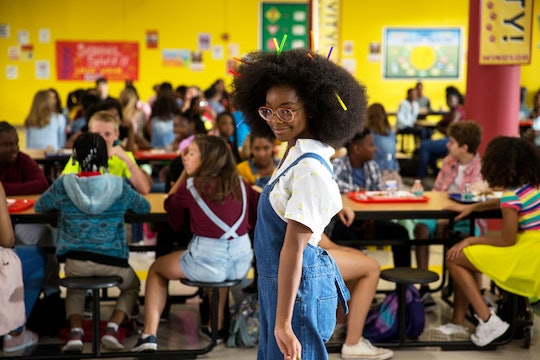 I grew up yearning for young adult movies with a black girl in a starring role. My all-time favorite movie is Crooklyn, a Spike Lee film centered around a family in a Brooklyn brownstone, following their trials and tribulations through Troy Carmichael, the dough-eyed, cornrowed pre-teen who navigates her colorful city life alongside her raucous brothers and neighborhood friends, and bourgeois southern relatives. There weren’t many other films that drove home young adulthood from the vantage point of black girls like Crooklyn successfully did, until Little — the movie I’ve dreamed of since Crooklyn.

Marsai Martin, most known for her role as Diane in ABC’s black-ish, executive produces and stars in body-swap comedy Little, a film that sees tech titan Jordan Sanders (Regina Hall playing a terrifying executive who would give Miranda Priestly a run for her money) undergo a transformation into her 13-year-old self — a trip that gives her the chance to address her traumatic middle-school experience that made her into the closed-off, deeply offensive, yet successful, executive she ended up becoming.

Alongside the evil corporate executive is her loyal and insecure assistant April, played by Issa Rae, who rolls with the punches (literally) and takes on the role as aunt to her now-tiny, still-evil boss. As April, Rae carries the storyline of a woman who is loyal and loving to a boss who is undeserving of it with her signature witty humor, and ultimately it is April who teaches Jordan about the power of friendship, while Jordan finally breaks her evil streak to give April a lesson in mentorship.

This film is breaking barriers for black girls and women who want to see themselves on screen.

"It's something that's about female empowerment and how there is a such thing as second chances and [to] just be yourself,” Martin told MTV News of her intention creating a movie especially for girls and women of color.

There were plenty of body-swap films for me to watch during my childhood and adolescence — Big, Freaky Friday, 30 Going On 30 — but of course those movies so often only gave me the opportunity to "swap" into a white body. The representation in Little therefore has a kind of double potency; in replaying Jordan's middle-school experience, we get a character we could have used back when we ourselves were young.

Martin explained to MTV how a lack of representation inspired her to pitch her first-ever film at 10-years-old, a dream that preteen me often had in response to a problem that still hasn’t been solved:

Her goal here was to make something for which "everybody feels welcome and … they feel comfortable in who they are.”

This film is breaking barriers for black girls and women who want to see themselves on screen, and Martin is an inspiration to kids — adults, too — who have a dream and the will to act on them.

While this movie is no Crooklyn for a die-hard fan like me, perhaps it may become my daughters’ Crooklyn. Or better yet, maybe there will be more films centered around black girls so that they aren’t writing a piece like this in 2039.