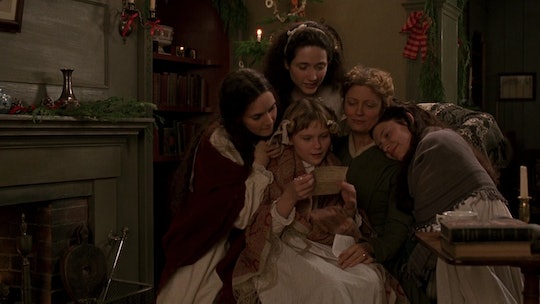 I have a Pavlovian response to the 1994 adaptation of Little Women: as soon as I hear the opening notes of the March sisters warbling away at the piano, I burst into tears. And then I cry steadily for the next two hours until the very end, whether the sisters are celebrating or suffering through a fresh round of heartbreak. It may be incredibly weird that Little Women is my favorite Christmas movie and yet it makes me bawl like a baby, but in a bizarre way this annual watch-and-weep has become my favorite Christmas tradition.

It might not seem like Little Women is a Christmas movie because it cycles through all the seasons as the years pass. But some of the biggest moments happen during the winter holidays. The story begins with Marmee wishing each girl a merry Christmas as she sends them off to bed on Christmas Eve. That's how the first half of the film ends, too, with one last Christmas before everything changes. And if it wasn't for Christmas, the movie might never have been made at all.

Being able to market it as a Christmas movie was what made Columbia Pictures give it the green light. According to Vogue, Amy Pascal, then the executive VP of production, had been trying to bring Little Women to the big screen for years without success. It wasn't until she pitched it as a Christmas movie that the male executives gave it the go-ahead. Little Women premiered on Dec. 21, 1994 and sometime after that, it was introduced to me.

The vibe of the movie is unapologetically Christmasy even if snow eventually melts to give way to flowers. But it's an old-fashioned Christmas as befits its setting, which is at least part of the appeal. The world of Little Women is cozy and complete, centered around the March house and everything that happens within it. Director Gillian Armstrong makes it feel like a real home, as lived in and loved by the audience as it is by the characters. And it became a home I could visit every year on Christmas, too.

I was only four years old when Little Women was released, so it's hard to remember a time in my life before it. It was always there, when I was littler than littlest March girl Amy, long before I ever knew what kind of woman I would grow up to be. Sometimes the media you latch onto as a kid is like that: it becomes so enmeshed in your identity that you don't know what you did before it and you don't know what you would do without it. This movie has followed me from VHS to DVD to streaming, and not once in twenty-four years has its shine dimmed at all.

Why would Beth ever want to leave those idyllic woods, the snowy lawn, or those hazy windowpanes that are perfect for gazing at the dreamy neighbor boy? I'd never want to leave either. Pretty much every viewing ends with me wistfully looking up houses for sale in Concord. No setting seems better suited to Christmas, with its fresh blanket of frost and boughs of fir abounding.

But if it was just about aesthetics, the movie wouldn't resonate as deeply as it does. It's about each girl and how they relate to each other; it's about family, but in a way that feels especially reassuring during the holidays. Even when awful things happen, you know the good stuff will overcome it. Jo will forgive Amy for burning her manuscript. Beth will get her piano. Mr. March will come home.

Though I like to save Little Women for Christmas every year, its impact on me has stretched far beyond that. There's no doubt that Winona Ryder's Jo imprinted on countless little girls who would grow up, like me, to become writers. I craved Jo's ability to strike out on her own even when it was hard. I identified with little house mouse Beth. I shared Amy's love for frivolities, even if they seemed superficial. Meg felt like a foil: we had the same name, but didn't appear to share anything else. Even Susan Sarandon's Marmee seemed like a solid blueprint for a future where I might have a daughter of my own.

I could go on about Armstrong's direction and Robin Swicord's script; Ryder's lively independence and how Kirsten Dunst is so luminous as Amy that her absence from the second half of the movie always stings (sorry, Samantha Mathis). But when something is your favorite, it's not really about the technicalities. It's not objective, or even debatable. You love something because it folds itself into your heart in a way you can't totally explain.

I still don't really know why Little Women makes me cry so much. Maybe it's just that good at bringing me along on the journey. Maybe it's because this movie has been with me my whole life. Maybe it's because I'm a big sap. But whatever the reason, it just doesn't feel like Christmas until I've sniffled my way through it at least once. Okay, twice.