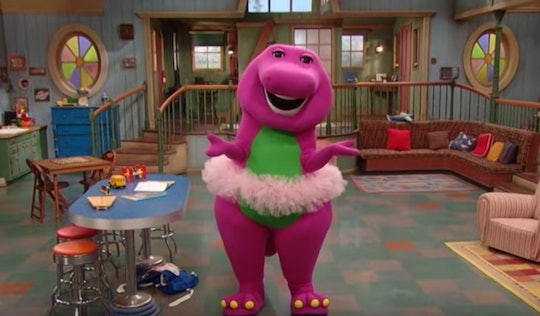 Don't Panic, 90s Kids, But Barney The Dinosaur Will Star In A New Live-Action Movie

Buckle up 90s kids: Barney, the purple talking dinosaur who graced our TV screens in Barney & Friends, is making a comeback. While it might sound a little bizarre, a live-action Barney movie is apparently in the works and it will reportedly show a brand new side to the beloved dino.

News broke on Friday, Oct. 18, that Barney is finally getting his chance to shine on the big screen. Actor Daniel Kaluuya and Mattel Films are coming together to produce a live-action film based on the character, according to The Hollywood Reporter. But the upcoming movie might not be the "dinosaur sensation" you remember. Instead, Kaluuya is reintroducing the dinosaur in a brand new way.

"Barney was a ubiquitous figure in many of our childhoods, then he disappeared into the shadows, left understood," Kaluuya told Entertainment Weekly in a statement. "We are excited to explore this compelling modern-day hero and see if his message of 'I love you, you love me' can stand the test of time."

Indeed, Barney was keen on spreading messages of love and friendship to young kids, especially through the now-iconic song "I Love You," which you certainly remember the words to. Needless to say, it will be interesting to see what Kaluuya means by "stand the test of time"...

Barney made his television debut in 1992 with the show Barney & Friends, according to NPR. The show was created by a Texas mom named Sheryl Leach, who was inspired by watching episodes of Sesame Street, a show she told NPR was "very hip and very cool." Leach wanted the opposite of that for toddlers, and thus, Barney was born. "You know, it was sweet and it was loving, and it was totally made for kids, definitely not hip and cool," Leach told the news outlet in 2017.

But it sounds like this rebooted version of Barney might get a different take that Leach didn't necessarily set out to make years ago. Robbie Brenner of Mattel Films told Deadline in a statement that they are excited to bring a "new approach" to the purple dinosaur and his friends. "Working with Daniel Kaluuya will enable us to take a completely new approach to Barney that will surprise audiences and subvert expectations," he said. "The project will speak to the nostalgia of the brand that will resonate with adults, while entertaining today's kids."

This sounds like it could be a win-win for parents and kids, considering, at the time of the show's premiere, Barney & Friends wasn't necessarily a huge hit with parents. In 1993, the Hartford Courant wrote that Barney & Friends "made parents nauseous," but kids felt the opposite. At the height of its success, the show was reportedly pulling in 14 million views each week, according to The Independent. The show was a hit with toddlers for obvious reasons; it was light, fun, and taught kids new songs, games, and lessons about using their imagination, according to Education Week.

It's unclear what exactly this reboot will be about or when it will hit theaters, as Entertainment Weekly reported. But one thing is certain: Barney and his crew are making a comeback.