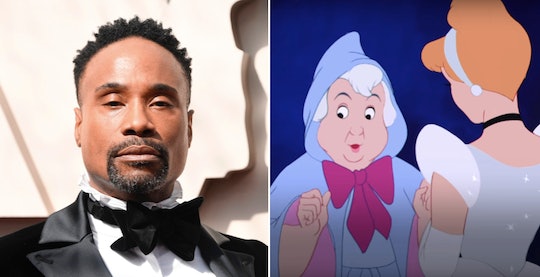 When it was announced that James Corden would be spearheading a Cinderella remake, people were intrigued. This cautious excitement only grew when it was discovered that Camila Cabello would be playing the lead, and marking her acting debut. Most recently, though, it's been confirmed the live-action Cinderella remake will star Billy Porter as the fairy godmother. And, of course, people are obsessed with this brilliant casting decision.

In September, Porter not only won his first Emmy Award for his role as Pray Tell in FX's musical drama Pose, he also became the first openly gay black man to snag an Emmy for the category of "Outstanding Lead Actor in a Drama Series," according to Rolling Stone. And it seems the talented actor isn't slowing down.

During a Q&A session on Saturday, Oct. 12 at the New Yorker Festival, Porter confirmed that he'll be playing the Fairy Godmother in the upcoming Sony film, Deadline reported. It was already known that Porter had been in talks to join the remake, according to Deadline, but these talks turned into reality, as evident by the New Yorker's Instagram Story posted on Saturday.

"I have a couple movies that I'm working on," Porter said in the clip, according to Entertainment Tonight. "I'm gonna be playing the fairy godmother in the new Cinderella movie with Camila Cabello."

People on social have seemed pretty pumped about the most recent Cinderella casting choice, that's for sure. One person commented, "Oh my god this is actually perfect."

Another person wrote, "We all know it’s gonna be legendary."

Yet another Twitter user declared, "OMG! I will so watch this a hundred times."

Also at the New Yorker Festival, Porter spoke on some other upcoming projects of his, including having signed a deal to write a memoir, People reported. “I have a movie with Tiffany Haddish, Rose Byrne and Salma Hayek, Like a Boss,” he shared during Saturday's panel. “I have a new album coming out next year. I am directing an episode of Pose... There’s a play that I directed that just debuted in Boston that’s coming to New York. And I’m gonna be the first male on the cover of Allure magazine. I’m a gypsy — the only thing I know how to do is work. I’m ready. I’m ready for all of it."

But back to the Cinderella remake for a second. The film — which will be produced by James Corden and Leo Pearlman, and directed by Kay Cannon — won't only be starring big names like Cabello and Porter. Idina Menzel is also reportedly in talks to join the cast as the evil stepmother Evelyn, according to Deadline. (Squee!) I can't wait to see this talent combination. Unfortunately, there's still a bit of a wait ahead, as the film's release date isn't until Feb. 5, 2021.

With all of the remakes hitting theaters over the past several years, it's easy to get lost in the, "Oh no, not another one," mentality. What I've found is this: If you go into the experience with an open mind, you just might be surprised. No, the fairy godmother in the classic tale of Cinderella isn't typically a black man. But you know what? I have a feeling Billy Porter is going to totally rock it. Congrats to him on officially landing the role!