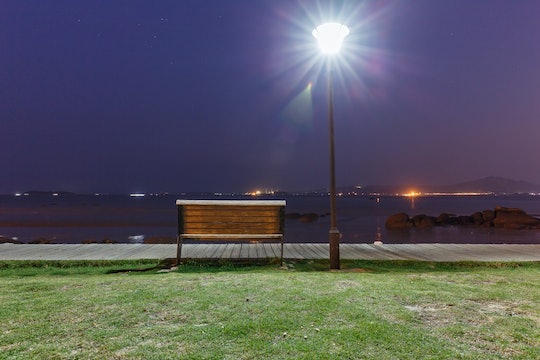 Aside from age and family history, little is known about the factors contributing to breast cancer. Excitingly, scientists may have discovered a cause for the high number of diagnoses. Women living in brightly lit neighborhoods may be more at risk for cancer, researchers found. Exposure to electric light at night (LAT) has been linked to breast cancer development, according to CNN.

The study, coming out of Harvard University, linked high breast cancer risk in women to residences in neighborhoods with higher levels of outdoor lighting during nighttime hours. Harvard attributes these findings from the study to the Nurses' Health Study (NHS), one of the largest investigations into health concerns for women. (The study appears to have examined cisgender women. People who do not identify as women could still be affected by this health issue.)

In order to gather data, epidemiologist Peter James, along with researchers and colleagues, studied breast cancer occurrence in NHS nurses from 1989 to 2013. More than 100,000 women participated in the study and had their homes geocoded to determine LAT levels in their neighborhoods. By 2013, 3,549 of the women had been diagnosed with new cases of breast cancer. Researchers were not surprised by this number due to the large sample size and the rate of breast cancer in women overall — an estimated one in eight women will develop breast cancer, according to breastcancer.org.

When reviewing the data, researchers found a strong correlation between the women's LAT levels and their risk of developing breast cancer later in life. More specifically, the more LAT, the greater the risk. Additionally, the relationship between LAT and cancer development was highest among young women who were diagnosed before menopause.

The study's findings remained accurate even after researchers took into consideration other risk factors — such as age, number of children, weight, etc. These results add to the growing body of data attempting to attribute a cause to breast cancer, which is still unknown despite it being the leading type of cancer in women worldwide. Environmental factors, such as pollution, have also been examined as potentially influencing cancer diagnoses. Recent findings suggest that light pollution caused by LAT may fall into that category as well.

At first glance, these findings seem far fetched due to the non-toxic nature of light rays. As a potential explanation for how light can impact cancer cells, researchers suggest the impact that artificial light has on women's natural transition into "nighttime physiology," which is usually triggered by the setting of the sun. Women living in brightly lit neighborhoods may not be receiving the needed dose of melatonin the body naturally releases at dusk, which has been proven to have cancer-fighting capabilities.

While the results of this study are both fascinating and frightening, I wouldn't recommend packing up your things and moving your family to a dark alley just yet. Researchers are still exploring other potential environmental factors to determine exactly how large of a role LAT plays in the lives of these women. That being said, this will hopefully be the first of many studies to pinpoint potential causes of breast cancer and better people to lower their risk.