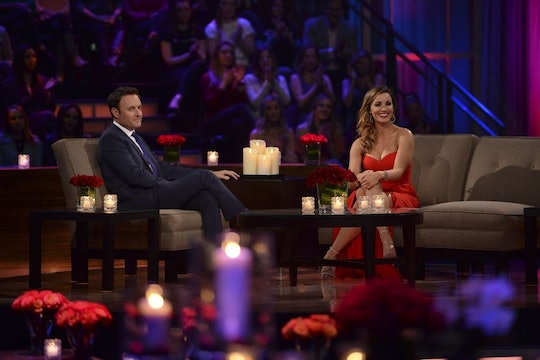 Liz Gave An Empowering Speech On The 'WTA'

It probably wasn't easy for Liz to face Bachelor Nation again after her plan to reconnect with Nick following a one-night stand blew up in her face. But it looks like she really took some time to reflect after she got sent home, because Liz's speech on The Bachelor Women Tell All prove that she walked away from the experience with some crucial life lessons about self-love.

While the fact that Liz and Nick had sex once before the show didn't phase plenty of people, apparently Liz's small town upbringing made her a target in her hometown after her story aired. The impact of going after what she wanted and being forthcoming about her history seemed to adversely affect the way some people viewed her, even though she admitted that the reason she didn't pursue something with Nick when they first met was because she was still grieving another relationship. She confessed that she was in tears when she got sent home because, said Liz, "I knew what I had to face because of the way I was brought up."

She told Chris Harrison that what she learned from the experience was not to underestimate people and that the friends who were really her people would love her for who she really was, nationally televised trysts and all.

Said Liz during the Women Tell All:

I can tell you that the one thing that I found through all of this is that there's nothing more important than staying true to yourself. That's what I found through this whole experience, which is why I do not regret it at all. People who matter to me the most just love and accept me for who I am, despite my past. That does not define you who are. Despite your future, who you choose to be every single day when you wake up, you deserve to be fought for. You are worthy of love. It doesn't matter your shape, it doesn't matter your sexual past, it doesn't matter what you have done. You deserve a man who loves you for who you are and who's going to fight for you for who you are.

The best part of Liz's speech was that she delivered it from "the hot seat" straight to the other contestants sitting on the panel. She gave shout outs to the women who reached out to her after she got sent home, writing her letters and thanking her for what she had done on the show. The feeling seemed to be mutual as the other women showered her with affirmation, validation, and plenty of literal applause in response. In spite of her failed relationship, Liz turned out to be an unlikely feminist heroine on this season of The Bachelor, which is always a nice way to be remembered.