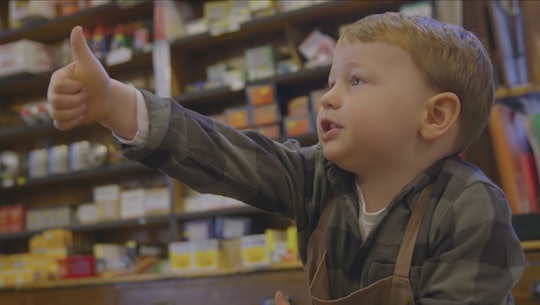 Every year, department stores and major brands hope to capture consumers' attention, and money, with holiday-themed ads. This year, however, the title of Best Christmas Ad Of The Year hasn't gone to an expensive ad produced for a multi-million dollar company. Instead, it's a viral Christmas advert for a family-run hardware store in Wales that's warming hearts all around the world. The best part? The ad reportedly only cost $130 to make.

Haford Hardware — a hardware store run by Pauline Lewis and her grandson Thomas Lewis Jones in the Welsh town of Rhayader, the Guardian reported — released its annual Christmas advert earlier this month. Since then, the ad has quickly become a viral hit, drawing high praise from people all over the world. Made over the course of just one day by Jones and his friend, filmmaker Josh Holdaway, the advert features Jones' 2-year-old son Arthur.

In it we see Arthur wake up, eat breakfast, brush his teeth, and head off to open Haford Hardware. Over the course of the day, Arthur repairs a broom, sweeps the shop, restocks shelves, rings up customers, sets up a Christmas window display, manages the shop's accounts, and even gift wraps one customer's holiday purchase. After closing the shop at the end of the day, Arthur heads outside, where, with a little TV magic he's turned into Jones.

On Twitter, people have praised the ad as being "brilliant and heartwarming" and having "true meaning." Others hailed it as one of the best holiday ads they'd seen in years. "This must be my favorite advert in some time," one Twitter user wrote. "It beautifully captures something adverts tend to miss. It touches home to those who appreciate family, hard work, being a kid and Christmas."

While blown away by the commercial's international success, Jones told the Guardian he thinks people have been drawn to the advert's message. "I think it has struck a chord because it's such a simple message," Jones told the paper. "It's real and it's not saying: 'Spend, spend, spend.' I think you can tell it's made by people who care about this business."

Jones told the BBC that his only real expense in making the advert was the roughly $130 he paid for American singer Andrea von Kampen to be able to record a cover of Alphaville's 1984 hit song "Forever Young" in a studio.

Fortunately, Arthur was willing to work for free as much of what he was filmed doing are things he normally does around the shop. "Arthur comes to the shop most days to see me," Jones told Wales Online. "The stuff you see him doing in the video isn't out of the ordinary." Still, Jones told Wales Online that he was "bursting with pride" at his son's performance in the advert. "He was so good. They say never work with animals or children but he was a joy."