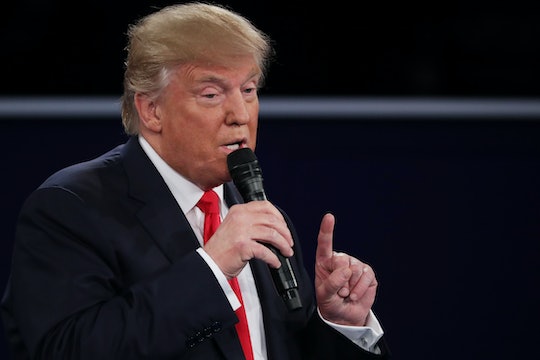 There was one major thing that the second presidential debate needed to touch upon, and that was the Trump Tapes. You know the ones, right? The 2005 Access Hollywood tape that showed Donald Trump have a lewd conversation with Billy Bush was a huge game changer for Trump's campaign. And how he decided to handle it during the debate was just as important. His response wasn't productive, and instead these "locker room talk" tweets and memes show that those comments are simply the epitome of rape culture.

The comments that the American public heard on Friday afternoon when the Washington Post released the video of Trump and Bush riding in a bus to a soap opera set were extremely troubling. He spoke about grabbing women "by the pussy" as well as getting away with essentially anything, since that's something you can do when you're famous. Then, on Saturday, CNN released decades-old comments Trump made about women on Howard Stern that are equally troubling.

The comments Donald Trump made are much greater than "locker room talk." They instigate rape culture. They hurt people. And despite what presidential candidate Donald Trump things, they are not "just words." These comments promote a type of conversation that puts people in danger, mostly women, who he swears he respects more than anyone. If Donald Trump truly respected women more than any other person, he would not suggest you can do anything to anyone because you're famous.

Using the excuse "locker room talk" suggests that it is OK to not ask for consent. It is also eluding to the fact that all men are having these conversations in the locker room.

By stating that his words are "just words" completely minimizes the impact these comments have on women. Minimizing the impact and power that these comments have on women shows that he simply doesn't understand the impact that this video has on his campaign. If he did realize that these words are hurtful, he would apologize. He wouldn't make excuses. He wouldn't say "everyone is doing it." This isn't D.A.R.E., Donald Trump, you can not peer pressure the nation into believing that just because you're talking about women this way means that everyone is.