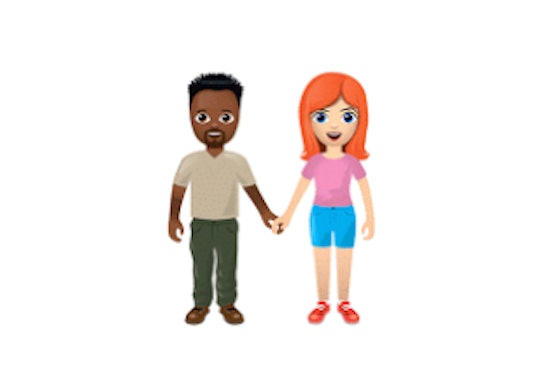 Interracial Couple Emojis May Be Coming Soon Thanks To Tinder

Great news in the world of digital media representation: a recent proposal to create new interracial couple emojis has passed an important round of voting, and the emojis may be coming very soon. The news was shared with Romper via email, which noted that the proposal was actually from Tinder, the popular dating app. Tinder posted about the proposal to create the new interracial couple emojis on its blog in February, and recently updated the post with the excellent development that the Unicode Consortium passed a proposal for interracial emojis during its meeting in July.

The Unicode Consortium is the non-profit group that basically controls what official emojis exist. It decides what new emojis will be adopted, and when, according to USA Today.

In February, Tinder submitted a proposal for interracial couple emojis to the Consortium. You might be wondering why Tinder, of all companies, got invested in this cause. Tinder pointed out in its initial blog post about the campaign that a study had suggested that Tinder, as well as the subsequent rise in the popularity of dating apps, could be responsible for an increase in interracial marriages.

And when the company commissioned the Global Tinder Survey on Interracial Relationships, it found that 72 percent of those surveyed thought Tinder was the most racially diverse dating app. So it's safe to say the company has some stake in making sure its users feel represented.

So Tinder submitted a proposal to create new interracial couple emojis, and it passed the first round of voting unanimously, which is a very good sign for the campaign. The proposal for interracial emoji couples became more popular over the past few months thanks to a Change.org petition, which over 50,000 people had signed as of Tuesday afternoon.

The next step in this process is a vote for final approval in January 2019, the Tinder blog reported. And if it's implemented, the new emojis will have five skin tone options, which is a great start. And not only will the emojis have racial diversity, but they'll go one step further and include same sex couples as well, the email to Romper noted.

You can check out the "Proposal for Inter-Skintone Couple Emoji Sequences" yourself. The change would allow for "the addition of 55 ZWJ sequences for recommended general interchange (RGI) to allow for inter-skintone versions," including emojis of a man and woman holding hands, two men holding hands, and two women holding hands.

The proposal laid out exactly what the campaign is seeking, and pointed out how important this sort of diversity is. An abstract for the proposal read, in part:

The lack of representation for diverse racial identities is a significant issue in an increasingly globalised society. With this problem gaining increased media attention, and since efforts have already been made to ensure the representation of non-heteronormative sexual identities, now seems an appropriate cultural moment to give people the opportunity to see themselves represented in the emoji world.

So it's a little shocking that emojis, something that so many people who use the internet and apps use and see every day, are not all that diverse when it comes to couples. It's clearly past time for this sort of representation to reach the emoji world, and it can only be a good thing for an app giant like Tinder to spearhead the efforts to make it happen.

Tinder is encouraging anyone who supports this campaign to post with the hashtag #RepresentLove on social media, and to get others to join the cause. If you'd like to see interracial emoji couples sooner rather than later, it can't hurt to send out a quick tweet in support.