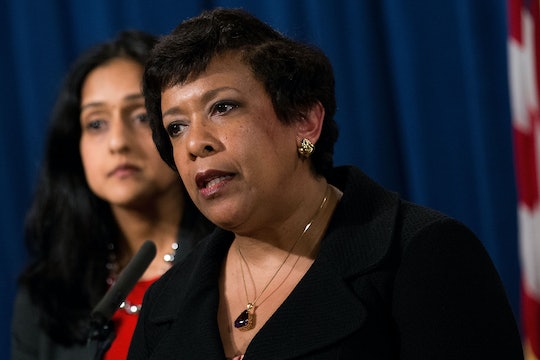 After the state of North Carolina countersued the Department of Justice on Monday for threatening to withhold federal funds if the state didn't repeal it's anti-transgender bathroom bill, Attorney General Loretta Lynch made a statement on HB2 that gets to the heart of all of the issues involved, both legal and personal. Lynch's statement about the justice department actions focused, in large part, on how this fight is about more than just "bathroom laws" and tied the struggle for LGBT rights into the long history of civil rights in America.

"This is about the dignity and respect we accord our fellow citizens and the laws that we, as a people and as a country, have enacted to protect them – indeed, to protect all of us," Lynch said in a press conference. "... It’s about the founding ideals that have led this country – haltingly but inexorably – in the direction of fairness, inclusion and equality for all Americans."

She also took the moment to speak directly to the transgender community directly, both in and out of North Carolina, saying that Obama administration was on the community's side and that, along with the Department of Justice, it would do "everything [it could] to protect [them] going forward."

Lynch's statement about her department's solidarity with the LGBT community was moving, for sure. Of course, words mean very little when they aren't backed up by real action — and that's exactly why what the Justice Department did Monday afternoon was so momentous.

If you had any doubt, Lynch is serious. In her televised statement today, she explained that, despite the pending lawsuits, the federal government would be upholding the right to "retain the option of curtailing federal funding to the North Carolina Department of Public Safety and the University of North Carolina as [the] case proceeds."

"None of us can stand by when a state enters the business of legislating identity," she said.

Last week, the Department of Justice gave North Carolina until the end of business on Monday to confirm that it would not comply with the controversial bill, which forced transgender individuals to use the bathroom of their assigned sex at birth. Instead of complying with the Justice Department's request, the state of North Carolina sued the federal government for meddling in its affairs. Lynch's department in turn filed a civil rights lawsuit on Monday, which means that, for the time being, North Carolina bathrooms are open for use and a very real federal discussion about bathroom laws is probably going to occupy news cycles all summer long.

The civil rights lawsuit that the Department of Justice filed on Monday shows that the federal government is not willing to let states uphold discriminatory laws — even if, technically, laws are up to states to decide. By name dropping Jim Crow laws, the landmark Brown v. Board of Education case, and the 2015 ruling that allows same-sex marriage in federal courts, Lynch is essentially putting her foot down, so to speak, on discrimination.

If you thought the Obama administration was going to just wait until November for the election, think again. It looks like there are some issues they're still looking to figure out before the next president takes the office.