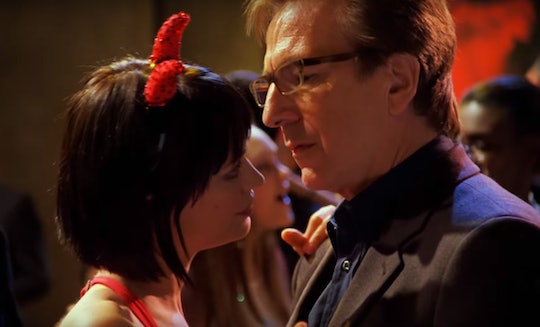 'Love Actually's Karen & Harry Might Not Have Gotten The Ending We'd All Hoped For, & The Internet Cannot Handle It

It's a holiday gift fans aren't sure they wanted — OK, OK, if we are being honest, we hope this news came with a gift receipt so we can return it immediately because no. Just no. The script editor for Love Actually revealed what happened to Karen and Harry, and the answer isn't as happy as we'd hoped. Emma Freud live tweeted the movie and, in the process, answered questions about the fate of Emma Thompson and Alan Rickman's relationship after Love Actually. (Yikes, guys. Yikes.) If you haven't seen the movie, here's the condensed backstory of Karen and Harry's relationship: Harry is flirting with his secretary, Mia (Heike Makatsch), and his wife, Karen, played by Emma Thompson, breaks down in tears when she finds out. At the end of the film, Karen and Harry seem to be back together, but it’s pretty unclear.

Naturally fans were curious: Did Harry actually have an affair with Mia, and are Karen and Harry still together at the end of the movie? Well ... I hate to be the one to break it you (like, literally, this breaks my heart because I want to believe that love is real! Love is real, and people can change! Just look at Harry!), but things don't look so great for the couple everyone was rooting for.

Leave it to Twitter to get to the bottom of the biggest question of the decade: Did they, or didn't they? (And then leave it to Twitter once again to summarize our feelings on the entire matter.) It's been 12 years since Love Actually hit theaters, and for 12 years, we've all been duped by one of the biggest lies Hollywood has ever thrown our way. When asked by Twitter user Carlotta B. about whether or not Harry (played by Alan Rickman) had an affair, script editor Emma Freud was forced to hit us with the truth (and if you'll excuse me, I'm going to take the rest of the day off to heal my shattered heart):

Last night, though, Freud tweeted a message that changed everything:

And this one tweet summed up how we're all feeling:

It's evidence that, more than 12 years after Love Actually's release, the world is still just as invested in the tale of Christmastime in London.