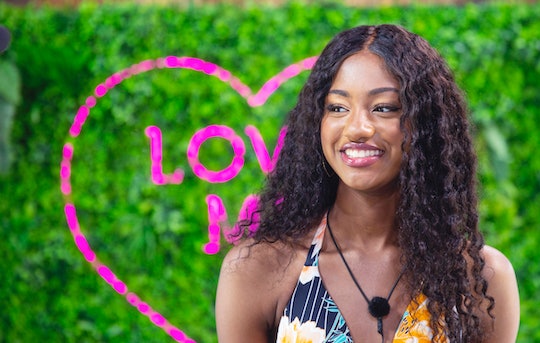 Alana Is Definitely A Fan Fave On 'Love Island'

Love Island has officially arrived in the U.S. so I hope your tweeting fingers are ready. On the reality show, airing on CBS, singles are sent to live in a luxe villa in Fiji, where they must couple up and outlast the other Islanders to win love and money. The show airs a whopping five nights a week, so there's always drama to discuss. The ladies banished Michael Week 1, so it's their turn to feel threatened. A quick glance at Love Island U.S. tweets proves that Alana has an army of fans ready to protect her from expulsion at all costs.

As you may or may not know, Alana is a 21-year-old college senior who is studying various cultures at Bowdoin College, according to her official CBS bio. Although she's never been in a "serious" relationship, I think it's safe to say that she's no stranger to popularity. A fun fact in her bio: She apparently won prom queen in high school even though she didn't "run, campaign or nominate herself". Well, OK then.

She doesn't have to work hard for fans on Love Island either, where she is currently paired with Yamen. Recently, Yamen told new girls Christen and Katrina that he's open to meeting someone else and Twitter was absolutely not having it.

People don't only blame Yamen for the fact that his relationship with Alana is a little bit rocky. One Twitter user seems to think Love Island is a mature place where women should discuss the fact that they're trying to steal each other's men.

Some fans seem to think that Yamen just isn't as into Alana as she is into him, and of course she deserves someone who actually appreciates her.

I hope Alana can read Yamen's signs and start mingling with other men. That's part of the game and he's certainly not shy about playing.

All the chatter I saw about the way Yamen is treating Alana made me more curious about him, so I went in search of other tweets about him.

Unsurprisingly, I didn't find many positive comments about Yamen. Most people are really scared that an uncoupling might be coming. One person is worried that "things are going too well" and Alamen (Yalana?) is doomed. Others are calling for a full-on rescue mission. (I'm in.)

Fans just want to see Alana stay on Love Island and since Yamen hasn't exactly been loyal, she's going to have to find a new dude at the villa to take his place. That means Love Island has to send her some new, viable options. And that means hot guys who will not only be into her, but guys that she can see a real spark with. We're waiting, Love Island.

I'm crossing my fingers along with everyone else that Alana stays around long enough to find someone who is really into her. Remember, she's had luck on her side in popularity contests since high school. So, maybe all hope isn't lost yet for Alana on Love Island.